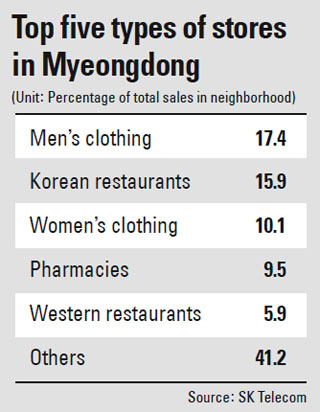 Here’s a smartphone application that small store owners could only have dreamed of in the past. When they are scouting locations for a new shop, the app shows them how much existing stores in the neighborhood have earned in the past year and the age groups and gender of major customers. The app even shows the peak hours for business.

The app, dubbed Geovision, is the brainchild of SK Telecom, the largest mobile carrier. The company announced Wednesday it will release the app for free starting next month.

Geovision was created based on location records of 26.5 million SKT subscribers, whose movements were tracked by base stations of the mobile carrier since 2006. SKT has been analyzing its subscribers by age to see where they go at what time of the day. The initial aim of the analysis was to devise more customized calling plans according to their movements.

The company realized such data could be useful for commercial real estate analysis. It combined the location data with payment records at affiliated stores of Hyundai Card and point records of 34 million OK Cashbag members, producing a scientific commercial property information system.

This is a successful use of so-called “Big Data,” a new term referring to a large amount of digital data building up as the use of smartphones and social networking services grow. Predicting what will happen in the future by analyzing Big Data is known as data mining technology.

“The range of data we analyze doesn’t include residential numbers of our subscribers,” said Park Yin-sik, an official at the company. “We only look at their whereabouts and patterns in consumption.”

Since late 2010, the company has allowed subscribers to use the data for a fee of 150,000 won per operation. But now it will offer it in an app form for free to subscribers and non-subscribers. It will be particularly useful for people starting new businesses.

The number of people starting new businesses has been rising in recent years due to the growing number of retirees from the so-called baby boom generation, who were born between 1956 and 1963.

“Those who start new businesses pay 600,000 won to three million won to get consultations about property,” Park said.

“Providing high-quality information to ordinary self-employed people is one way of carrying out corporate social responsibility.”