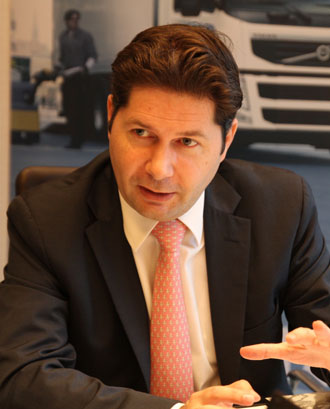 Christophe Martin, president of Volvo Trucks’ Asia sales operation, said Chinese and Indian companies will eventually catch up with European, American and Japanese truck makers, but it will be hard to reach the quality of services they provide.

“Twenty years ago, if we were told Chinese or Indian trucks would be sold in Malaysia, we wouldn’t have believed it,” Martin said in a recent interview with the Korea JoongAng Daily.

“Technology is becoming more accessible to major players. If somebody wants to develop trucks, this will happen, although those trucks may not be as fuel efficient or as comfortable. It has happened in the car industry,” he said.

“The difference is the people and the brand. Those are difficult to copy,” he said. “Brand and people are the biggest assets of the Volvo Group.”

The French-born executive visited Korea in late April to mark the opening of a truck complex in Gimhae, South Gyeongsang. A truck complex is a place where trucks are sold, serviced and repaired and drivers can rest. Volvo Truck Korea, a local subsidiary of the Sweden-based Volvo Group, is the only truck importer that directly runs truck complexes. It is also building another complex in Incheon, which will open later this year.

Opening truck complexes is in line with the company’s emphasis on quality services. Martin stressed the importance of good service to maintain its top position in the country’s imported truck market. Volvo Truck Korea is a leading importer of heavy duty trucks in Korea. According to the Korea Automobile Manufacturers Association, Volvo controlled 9.7 percent of the heavy duty truck and dump truck market here last year.

“My first priority is to be No. 1 in customer satisfaction,” he said. “We’re not selling trucks once. We are providing service for the whole life cycle of our customers.”

Martin particularly praised his Korean staff for offering excellent service to Volvo customers. “The level of commitment and competence of our staff is just great. I am extremely proud of the team in Korea,” he said.

“What is special about Volvo Truck Korea is that it consists entirely of Koreans,” he said. “It has been a long discussion in Volvo Group. Koreans are the best ones to work in the country.”

Martin said the local market is very demanding and in terms of environmental norms, customer expectations are very high.

Korea is one of the four Asian nations that require, or will require, the Euro 5 emission standard along with Singapore, Hong Kong and Taiwan.

Martin said Volvo Trucks will launch UD-brand trucks in September to expand its portfolio and meet the demand of customers who want more value for money. UD Trucks, formerly called Nissan Diesel, was bought by Volvo in 2007.

The idea of launching UD Trucks in the country is to become more competitive by offering a wider range of products.

“Volvo is a premium brand,” he said, “while the UD Trucks brand stresses value for money.”

Martin said the two brands will not compete with each other.

“The idea is not having direct competition between the two. Basically, Volvo Trucks and UD Trucks are complementary,” Martin said.

Volvo Trucks has operations in 130 nations through its subsidiaries including UD Trucks, the France-based Renault Trucks and the U.S.-based Mack Trucks. The company has strong footholds in Western Europe and North and South America. The Asian market is growing rapidly and now accounts for 25 percent of the group’s global sales.