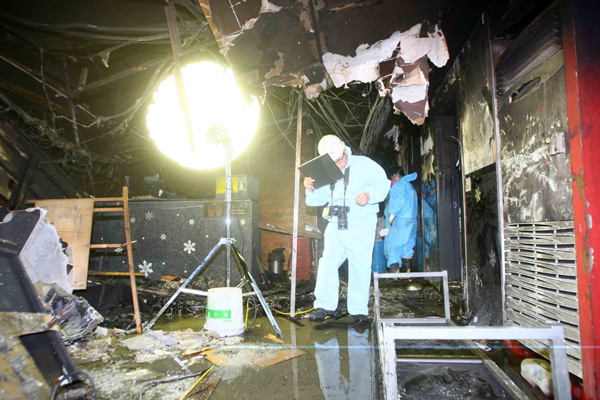 Fire investigators conduct a forensic examination yesterday after a fire broke out in a singing room in Busan, claiming the lives of nine and injuring 25 others on Saturday night. [NEWSIS]


BUSAN - A major fire broke out at a noraebang, or singing lounge, in Busan on Saturday night, killing nine people including three migrant workers from Sri Lanka, and injuring 25 others.

The blaze began at around 8:52 p.m. in one of the 26 rooms on the third floor of S Noraebang, according to the Busan Fire Department yesterday. The fire quickly spread through the entire 600-square-meter (6,500-square-foot) interior before being extinguished at around 10 p.m.

The fire started in the vacant room No. 24, located in front of the entrance and exit door next to the cashier’s desk. According to witnesses, the conflagration broke out with a bang. The smoke coming out of this room made it difficult for those inside to find the building’s two emergency exits.

While the police are still investigating the cause of the fire, the preliminary investigation found that all of the nine fatalities - seven men and two women - died from inhalation of toxic gases.

The large death toll is also a result of inefficient evacuation routes inside the karaoke facility, where there were neither windows nor safety sprinklers.

Karaoke employees failed to immediately call 119 (the Korean equivalent of 911) as they tried to put out the fire on their own, which delayed the evacuation procedure, according to witnesses. The rooms were also packed with more customers than usual as the fire broke out on a weekend.

There were people on other floors of the building, but they were able to evacuate to the roof or outside the building.

Among the 25 injured - 14 men and 10 women - only one is in critical condition, while the injuries sustained by the rest are not life-threatening.

Most of the victims were in their 20s and 30s, including the three Sri Lankan workers, who were hired by a Busan-based auto component manufacturing company. They went to the noraebang with three Korean colleagues, also among the nine dead.

“The workers were all loyal to the company and it breaks our heart hearing the news [of their death],” said Sohn Young-tae, an official from the company. “They seem to have met informally to spend the weekend together.”

The bodies of the nine fatal victims were transferred to eight Busan hospitals including Choonhae Hospital and Pusan National University Hospital.