Xenophobia: Is Korea really that wary of outsiders?

Xenophobia: Is Korea really that wary of outsiders?

Some 300 migrant workers gather together in a rally on April 29 two days before Labor Day at Bosingak, Jongno District, central Seoul, and hold up picket signs that state, “End racial discrimination and promise human and labor rights to migrant workers!” and “Migrant workers are not criminals! Stop treating us like criminals!” [YONHAP]


Some 300 migrant workers gathered for a rally to demand equal treatment and labor rights at Jongno District, central Seoul, on April 29, two days ahead of Labor Day.

The protesters were demanding recognition of migrant workers’ rights in Korea, but many also held up picket signs that stated, “Migrant workers are not criminals! Stop treating us like criminals!” or “End racism and stop xenophobia!”

The brutal murder and dismemberment of a young woman last month in Suwon, Gyeonggi, has contributed to public outrage against foreigners, as the killer was identified as a 42-year-old Chinese man of Korean descent. 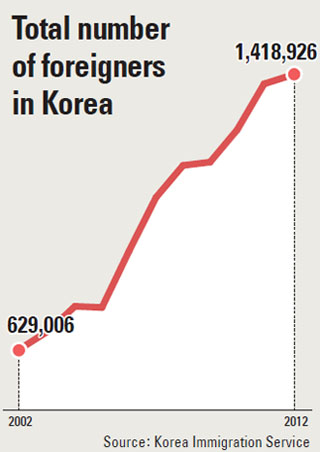 Almost three weeks later a 44-year-old Korean-Chinese surnamed Lee murdered his 43-year-old former girlfriend, who was also Korean-Chinese, but the case drew less attention because the victim was not Korean.

Executive Director of the Joint Committee with Migrants in Korea, Kwon Oh-hyun, stated regarding the Tuesday rally, “We can’t say the Suwon case instigated more difficulties for foreign workers in the past month. Even from before, there has been discrimination.”

The population of foreigners in Korea neared 1.42 million by the end of March, according to the Korean Immigration Service. Foreigners currently constitute around 2.8 percent of the population in Korea, stated the immigration office.

Around half the foreigners are Chinese, but a number of Vietnamese, Filipino and U.S. citizens also reside in Korea. And with the influx of foreigners in the country, Korea recently saw its first naturalized citizen lawmaker elected.

But that was not without the cost of facing xenophobic backlash from parts of Korean society. Despite Korea’s attempts to package itself as a globalized, multicultural community, an accumulation of recent social and political incidents again highlights the existing intolerance among some Koreans.

Jasmine Lee, a 35-year-old naturalized Korean citizen and Seoul public servant originally from the Philippines, was elected as a proportional representative for the ruling Saenuri Party in the April 11 general elections.

Since Lee became nominated as a candidate, she has received threats via the Internet as well as comments including, “What do you think you are, trying to become a National Assembly representative? Go back to your country.”

After winning one of the 54 proportional seats in the Assembly, the onslaught of offensive remarks continued: “Lee’s election will spread poison. Lowbrow foreign laborers will shed the blood of Koreans.”

A post on Agora, a popular Internet forum, stated, “Intermarriage between lowbrow immigrant foreigners and Koreans is an act of annihilating our people.”

Lee responded to the criticism on April 17 at a press conference by saying, “I was hurt by this incident, but this was also an opportunity to show how tolerant Korea can be.” Currently, Lee is the breadwinner in her family for her two children, as her Korean husband passed away in 2010.

An employee at the Seoul Metropolitan Government’s Guro Migrant Worker’s Support Center said, “We can’t say that the issue is really xenophobia more than an underlying sense of condescension from Koreans.”

Guro District, southwestern Seoul, is one of the districts with the highest foreign crime rates in Korea according to the National Police Agency, and is heavily concentrated with migrant workers, especially ethnic Korean-Chinese workers.

“Rather than evaluating the work of the migrant employee at face value, some employers would lump the group together and make derogatory remarks like ‘What else would you expect from a Chinese.’ They state that these workers are unclean, lazy or that they are suspicious of them,” she added.

The National Police Agency stated that there were 7,830 cases of physical assault involving foreigners, 308 sexual assaults, 157 cases of theft and 103 murder cases in 2011.

There were 26,915 foreigners convicted of crimes last year, said the police agency, which is up by over 19 percent from 2010.

But the crime rate for foreign nationals was 1.92 percent compared to that for Koreans at 3.77 percent of the population, according to the NPA.

The Ministry of Gender Equality and Family announced on April 18 the results of a survey conducted through the month of December on multiculturalism which indicated that of the 2,500 Koreans questioned, 35.5 percent stated that the “increase in the number of foreigners would lead to rising crime” and 30.2 percent of Koreans felt that foreigners are taking away jobs.

On the other hand, only 36.2 percent of Koreans surveyed stated they supported cultural diversity.

Yoon Jung-ho, the deputy director of the multicultural division of the ministry, stated, “We cannot look at the 36 percent and call that low or high because we have no comparison point. This is the first time we held this sort of survey and it is a starting point to begin building policies.”

The “Survey and Policy Direction on Multiculturalism of Gyeonggi Citizens” was conducted by the Gyeonggi Research Institute, a policy think tank established in 1995 and based in Suwon, Gyeonggi, in December 2011 on 1,371 residents of Gyeonggi over the age of 20, and the results were released in February this year.

As of March, according to the Korea Immigration Service, the highest number of registered foreigners reside not in the capital but in Gyeonggi at 30.6 percent, while 28.2 percent reside in Seoul. About three out of 100 residents in Gyeonggi are foreigners.

Choi Hee-soon, a researcher with the Gyeonggi Research Institute, stated, “The Suwon murder case and subsequent crimes did raise a lot of backlash in the Gyeonggi area. If the survey is taken now, there would be likely a more negative feeling reflected in the polls. Even back in December, there was a lot of concern regarding crimes committed by foreigners. But this sort of recent backlash is cyclical more than permanent.”

Yoon In-jin, sociology professor at Korea University, said, “Xenophobia and racism are different. Racism is when a race believes it is better than other races. Xenophobia can also include racism but is a fear and dislike of anything foreign.

“Rather, in the past five, 10 years, Korea has become a more multicultural society with better integration of migrant workers, multiethnic marriages and multiethnic children.”

But the professor stated that Korea also has a long way to go in order to assimilate multiculturalism.

Yoon sees three areas that Korea needs to work on: establishing laws that punish discrimination, better multicultural education, which is a two-way street, and a more responsible mass media.

Anti-foreign sentiment expressed by Korean society stems back to the Japanese colonization of the Korean Peninsula, and such sentiments are not limited to migrant workers from Asia.

The former president of the Association of English Teachers in Korea, Greg Dolezal, received an anonymous death threat from an organization allegedly called KEK (Kill Whites in Korea) in the fall of 2009. The e-mail stated, “We will gonna start to kill and hit White English spectrum from this Christmas. Don’t make a fuss in there, just get out. If you do not wanna listen this warning, our group will throw acid vitriol any white cheese. That’s enough to spoil in Korea.”

Dolezal stated the English could have been written poorly intentionally or out of true ignorance.

There are some 16,000 members on a Korean Web site dedicated to the eradication of illegal foreign instructors, known as the Anti-English Spectrum. Members of this portal site search down purportedly incompetent English teachers and report them to the police.

Some members go to extreme measures including following them around and camping out in front of their homes to the point of infringing upon personal privacy.

And 36-year-old Dolezal, from Georgia, who came to Korea in 2007 and taught English in Gimhae in South Gyeongsang, and then Busan, became a target of such hate groups and faced continuous threats from people who claimed they knew where his house was. His headshot circulated in e-mails that accused him of being a sex offender back in the States.

In a phone interview, he stated, “They [the haters] keep pushing the story that foreigners are a cancer in society and believe that without foreigners there would be no AIDS and no homosexuality and drug use. They think we are stealing their women and corrupting their children.”

The anonymous sender was not tracked down. The leader of the Anti-English Spectrum was brought to Gimhae for cyber libel charges, but the police eventually dismissed the case in mid-2010.

“When it came down to my word versus the word of another Korean, the foreign liaison officer at the [Gimhae] police station - even though he had known me for two years - accepted the word of the Korean. Now is that xenophobia? I don’t know what you call that,” he said.

His personal life took a toll as well. “The threats and animosity towards me on blogs, Twitter and Naver were too much for my then-fiancee,” whom he said he is no longer with.

Dolezal left the country in November 2011 and currently teaches at an international school in Laos. “Yes, I would definitely like to visit Korea again, because I still do love it, but at the moment I have no plans to return to live any time soon.”