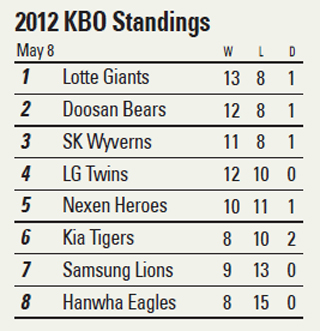 The headline-grabber last week was the matchup between Hanwha Eagles pitcher Park Chan-ho, who has 124 wins in Major League Baseball, a record among Asian players, and Samsung Lions slugger Lee Seung-yeop, who has amassed 488 home runs in the KBO and Japan’s NPB.

The two legendary ball players faced each other for the first time on Children’s Day in front of a sell-out crowd. And while Park turned out to win the battle, he lost the war.

The 39-year-old pitcher didn’t allow any hits during Lee’s three at-bats. But he picked up his second loss of the season after leaving the mound after the sixth. The Eagles would lose 5-0.

The defending champion Lions are still struggling to claw back to the top of the KBO standings. The Daegu-based team hasn’t produced home runs in its last five games, with core batters Lee and reigning home run king Choi Hyung-woo starting off sluggishly. With shoulder pain, Lee has no hits in his last 15 at-bats, while Choi has hit 0.179 with just seven RBI.

Tough tests await for the Lions, who begin this week with the league’s top team, the Lotte Giants, on the road. They then travel to Jamsil Stadium in Seoul to face the LG Twins from Friday.

The Giants have the best offense in the KBO, batting 0.295 as a team and slugging 0.399, powered by Hong Sung-heon, who leads the league in RBI. Hong will have the chance to show off his power against another power batter, Kim Tae-kyun of the Eagles, when the Giants travel to Cheongju on Friday.

Before hosting the Lions, the Twins, who won two in a three-game series against their archrival Doosan Bears last week, will face another Seoul-based team, the Nexen Heroes, starting tonight at Mokdong Stadium.

This series will see the Twins’ Jung Sung-hoon and the Heroes’ Kang Jung-ho, who are currently tied for first place in home runs with eight, go bat-for-bat. The Heroes will also be looking to end their three-game losing streak.