Koreans can’t have it all in EPL

Koreans can’t have it all in EPL 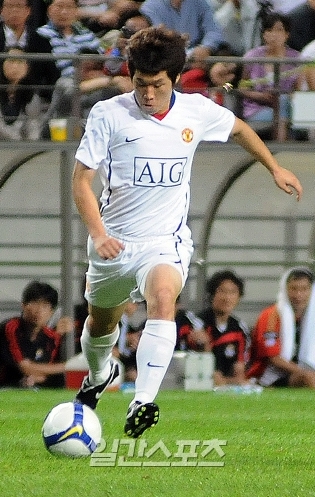 The success of one Korean footballer could mean disappointment for another as the English Premier League enters its final matches of the season this weekend.

With all 10 final games ready to kick off on Sunday, Park Ji-sung of Manchester United is hoping for a miracle to clinch the team’s 20th EPL title, while Bolton Wanderers midfielder Lee Chung-yong is looking for his club to avoid relegation.

Korean EPL fans have to pick a side this time because only one of the Koreans can come out of this weekend with the desired results, and much of it depends on how the Queens Park Rangers perform against Manchester City in a coming match.

On Sunday, United beat Swansea City 2-0 at Old Trafford and managed to stay alive in the title race. Park stayed on the bench, but the Red Devils scored two goals in the first half, thanks to Paul Scholes in the 28th minute and Ashley Young in the 41st.

The victory lifted United to be level on points with crosstown rival Manchester City at 86, but an eight-goal difference forced the defending champion to second place.

Manchester City, who is looking to clinch its first league title in 44 years, collected a 2-0 victory against Newcastle United on Sunday with two goals from Yaya Toure and is in a good position to win the title.

The clubs’ final match will be against relegation-threatened Queens Park Rangers at home. City, led by Italian Roberto Mancini, has amassed 17 wins and only one draw this season at Etihad Stadium.

But for Park to earn his fifth EPL title since entering the league in 2005, United must collect a victory against Sunderland, where Korean striker Ji Dong-won also plays, and hope that QPR either draws or wins against City on Sunday.

United manager Sir Alex Ferguson said yesterday that he hopes QPR will “get something,” saying he thinks QPR manger Mark Hughes, who is a former United player and ex-City manager, could rebound in the match from his bitter experience with City.

But should QPR earn points from a victory against City, it will outrank Lee’s Bolton club, pushing it to relegation from the top division.

The Wanderers, who have been in the EPL since the 2001-2 season, are currently on the verge of relegation at 18th with 35 points after collecting only one point against West Bromwich Albion at home.

Since Wigan is likely to earn points in its next two games, Bolton can only avoid relegation by winning its game against Stoke City and seeing QPR lose to City, which would keep the title from United.

Bolton being relegated would certainly be bad for Lee, who joined the club in the summer of 2009. The Korean winger would likely stay with Bolton in the second division, known as the Football League, because his contract, which runs until June 2013, reportedly doesn’t include a clause that would allow him to move should his club be relegated.

Lee will likely be especially sensitive about his team leaving the top league, as he has not contributed very much this year.

On Sunday against WBA at Reebok Stadium in Bolton, he played his first EPL match this season after being sidelined for almost 11 months because of an injury.

The 26-year-old, who had four goals and eight assists last season, fractured his right leg during a preseason friendly against Newport County AFC on July 31.