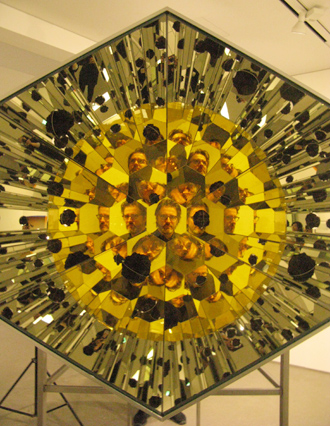 Poking his head through a large, three-dimensional hexagon with a glass-like facade, Danish-Icelandic artist Olafur Eliasson looked more like a mad scientist than a renowned artist with works displayed in some of the most prestigious museums and galleries in the world. As he posed for journalists inside a hole in his work “Lava Kaleidoscope,” made of aluminum, stainless steel, mirrors and lava rocks, reflections of his face bounced around this intriguing installation. Standing in front of the work, viewers felt as if they were being showered with water drops of Eliasson’s face.

“This is a void machine so you look into an empty space. What appears to be an object is just a reflection around it,” said the artist at the PKM Trinity Gallery in southern Seoul late last month. His new exhibition there, titled “Your Uncertain Shadow,” runs until the end of this month and is his third solo exhibition at the gallery.

“So there is a yellow sphere. The yellow sphere is made on the same geometric principle as the light [another installation work of his] downstairs, with a hexagon pattern. ... I make it look a little bit like a machine.”

Like the lava rocks Eliasson took from Iceland, which now look like glowing light generators floating in space, other materials in his works, including wood, lamps, spotlights and shadows have been put into a completely new context through Eliasson’s hands for this exhibition. The Korea JoongAng Daily caught up with the artist, known for his large-scale light installations, including “The Weather Project” which is installed at Turbine Hall of the Tate Modern in London, at PKM Gallery before the public opening of his new exhibition.


Q. In this exhibition, we see a lot of works that derive directly from nature, including wood and lava, but in the past, your works mostly related to artificial nature. Was there a change in inspiration for you this time around?

A. I often work with natural elements, but I also work with artificial elements outside nature. I think the line between artificial nature and real nature is not so sharp. I think that maybe all nature can also be considered culture.


Can you elaborate on this? What is the difference between real and artificial for you?

I am not so interested in categorizing what is real and what is fake. I think there is nothing which is real by definition and we perceive everything based on our cultural heritage and history. For some people, something being real is thought of as being made by God while other people think it is scientific construction. So this means for me, reality is relative. But you still have real things in the world. You have real political systems which are oppressive and you have global warming problems which are very real. And you have real natural catastrophes. I am not trying to say that everything is illogical, but I think for our perception of our surroundings, we should not make rules based on others’ perceptions.


Why did you focus so much on light and spectrums in this exhibition?

I have worked with light for many years now. I think light is interesting because it is ephemeral and it causes everything else but itself to be visible. So I’m very curious about the way that light can both be present but it can also be invisible at the same time. Very often I try to dematerialize the traditional concept of the object in art, and light seems to be a very good language or tool to do this with.


What did you ultimately want to convey through this exhibition?

All of the works in this exhibition are about our senses, mainly our sense of space. They deal with taking away space and the absence of space. [He points to one of his works, “Bhutan Borrowed View,” made with colored glass.] Here, there are three different colors: yellow, red and blue. If you cut away the hole in the blue, you see the mixture of red and yellow. So by cutting away holes and taking away color, we create new colors by mixing the three plates.

Listening to your explanation, your works this time feel more scientific than artistic.

I have worked throughout the years with a lot of different types of scientists. Mainly, I have worked with scientists who work in natural sciences, in physics. And I think personally I am not very talented in physical science, but I am interested in the methodology of physical science, especially because physical science has become more process-oriented and less goal-focused than 20 years ago. So when I look at science, I’ve also been very inspired by the social sciences such as the science of democracy and parliaments, the science of interdependence - how we can share a space and feel responsible for each other.

Speaking of your interest in social sciences, what are your feelings concerning the current status of North and South Korea?

I have lived in Berlin for 19 years. I moved to Berlin three years after the wall came down. I grew up in Denmark with a very distinct awareness of the Iron Curtain dividing Europe into two. It was a profound experience for me to live in Berlin in the years after the wall came down. And because I have experienced this, I can’t help but take particular notice of the Iron Curtain going through Korea. And of course, it is highly emotional to see a country being split in this way. I also understand that I do not fully understand the situation as it is more complex than I imagine. But still, I think it is clear that people in North Korea are suffering a great deal. And this suffering can be felt everywhere, not only in South Korea, but everywhere.

You seem to have a deep-founded interest in science and sociology. Why did you choose to be an artist?

I think as an artist I can talk to historians, electricians, businessmen and scientists. So I feel very fortunate and lucky to be an artist because I’m not always but very often capable of crossing traditional boundaries between science, politics, culture and business. And I think I’m a much better artist than a politician.

You do many different types of artistic work, including large-scale art exhibitions and even films. Do you approach your works differently according to genre?

I work a little bit in theater, films and I have also begun working with solar energy. I don’t think they are different projects. For me, it’s all about questioning the definition of reality and how we are in the world. This way, it is not just glassworks or watercolors. This exhibition was an attempt on my part to show the difference in how I work with things. I literally go from painting a watercolor to making a glass installation to making a film. For me, it is the same thing. What I’m trying to express is more important for me than focusing on the way I am expressing it.

What are you working on now?

Right now, I’m working on my biggest work ever for 1.6 billion people in the world who have no electricity. I’m making a very small work of art which you can hold in your hand and calling it “Little Sun.” I’m going to hopefully make a lot of them. As of now, there are around eight million people in Africa who have no electricity. In India, 300 million people don’t have access to electricity, and in Southeast Asia, there are 200 million people who live without it. In a lot of these places, there is increasing income, which means that there is the possibility that people can afford to buy “Little Sun.” Right now, I’m hoping to achieve a distribution system as a part of that work. On one side there is the work of art, and on the other side, there is the distribution. I hope to put some light inside their lives.