Debts pile up at state-run firms

Debts pile up at state-run firms 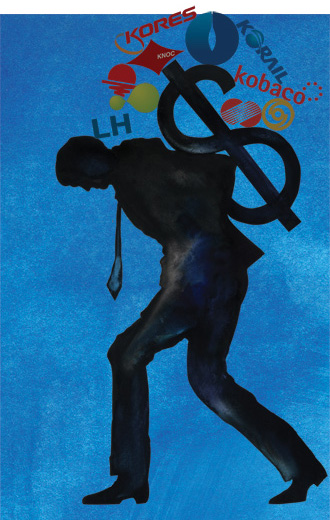 Korea has been applauded by outside experts for its low government debt, but Korea’s public enterprises have seen their debt snowball during the last five years as they bear much of the burden of the current administration’s costlier projects.

As much of Europe continues to struggle with government debt, institutions such as the Organization for Economic Cooperation and Development have lauded Korea’s fiscal soundness.

“[I want to] congratulate Korea on its strong recovery,” said OECD Secretary General Angel Gurria late last month during his visit to Seoul. “It is one of the most dynamic economies in the world [and] emerged from the worst global downturn with a public debt-to-GDP ratio of 33 percent. That is exactly one-third the average debt-to-GDP ratio of the OECD.”

However, such a low reckoning of Korea’s public debt changes when state-run companies are included. The Ministry of Strategy and Finance announced late last month that Korea’s 286 public enterprises had a total debt of 463.5 trillion won ($407.4 billion) in 2011, surpassing for the first time the total debt of both central and regional governments - which stands at 420.7 trillion won - since relevant statistics were kept in 2007. 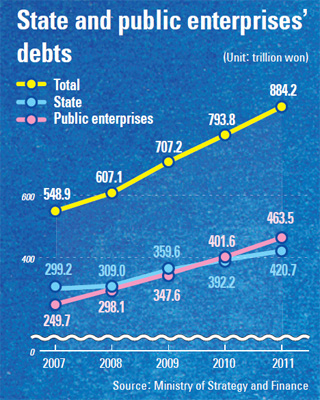 Although Korea’s government debt might be roughly one-third of Korea’s $1.16 trillion GDP as of 2011, adding public enterprises’ debt would actually mean public sector debt was up to 67 percent of GDP last year.

Part of the reason Korea’s public enterprises have such a heavy debt load is because they bore the brunt of the current administration’s costlier projects.

In the same vein, the Korea Water Resources Corp., which oversaw the four-river restoration project - one of President Lee Myung-bak’s campaign pledges - saw debt jump 56 percent in one year to 12.6 trillion won in 2011.

Moreover, the government’s tendency to freeze utility costs to try and control inflation has caused debts to snowball at Korea Electric Power Corp. and Korea Gas Corp., which respectively saw a 10.4 trillion won and 5.7 trillion won debt increase during the last year alone.

Downplaying causes for concern, the finance ministry pointed out in its report that public enterprises’ assets “far exceeded debts” at 698.8 trillion won, making repayments “not a big problem.”

Moreover, the ministry underscored that much of the expenses were long-term investments, such as overseas resource development and infrastructure building.

Global rating agencies have also expressed concern over the trend. Although Moody’s Investor Service recently revised Korea’s credit outlook up to “positive,” it expressed concern in a report early last month over Korea’s public-sector debt growing since 2007, of which a substantial amount was used for infrastructure and welfare projects such as low-income housing.

Signs suggest that public enterprises’ debt load could be lessened by rooting out corruption and tightening belts. The employees of Korea Rural Community Corp., which oversees large-scale agriculture projects, were exposed last year to have embezzled money and dodged taxes. Meanwhile, the total number of subsidiaries in state-run conglomerates increased from 42 last year to 91 this year.

State-run enterprises might look to LH’s playbook. Late last month, LH welcomed some 297 new employees for the first time since it underwent painful restructuring that cut 1,035 jobs since late 2009. Although it still has a lot of debt on its books, LH’s turnaround efforts managed to bring in net profits of 790.5 billion won in 2011.