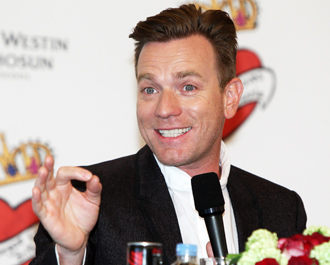 Shinsegae Department Store has picked Scottish actor Ewan McGregor as the face of its new initiative to promote British products within its stores.

The 41-year-old Hollywood A-lister arrived in Korea Sunday afternoon and attended a press conference at the Westin Chosun Hotel in central Seoul yesterday to launch the promotional campaign.

McGregor is the first male picked by Shinsegae to represent its store in such a way since it began to recruit models in the 1960s.

His promotions will focus on British art, fashion, furniture and cuisine.

Dressed in a smart black suit, McGregor thanked the press for a warm reception.

“It’s my first time here in Korea. Although I was at Incheon Airport one time while en route to Thailand, it’s my first time setting foot outside the airport, and I’m loving it,” the actor said.

He also attended “Shinsegae Loves Britannia” promotional party and a signing event before leaving the country on Monday evening. By Carla Sunwoo