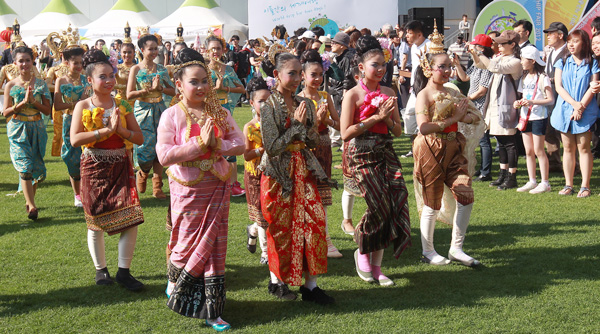 Participants from around the world parade across the plaza in front of Seoul City Hall during the two-day Seoul Friendship Fair in central Seoul on Saturday. The festival included numerous performances and other cultural experiences from 60 different nations. [YONHAP]


At Seoul Square in front of City Hall this weekend, the Diabolo Dance Theater from Taiwan performed a circus act on stage, followed by a warrior dance performance by a Mozambican troupe. At the same time, 60 exhibition booths featuring traditional folk art and costumes from around the world dotted the square.

These events, along with many others, were part of the 2012 Seoul Friendship Fair, a two-day event that took place last weekend. In its 17th year, the event, which highlights Korea’s connection with foreign cultures, attracted an estimated 400,000 visitors this year, including roughly 150,000 foreigners, according to the Seoul Metropolitan Government.

Aside from the performances and artifacts on display, the smell of exotic foods wafted through the crowd from 58 booths set up by embassies and community groups. And before the weekend’s grand opening, a parade representing 11 countries, which included the band of the Eighth United States Army, marched in front of City Hall.

Though these kinds of events are typical of the festival every year, organizers said that this year it operated under a more precise theme: “Two-Day Journey Around the World: Sharing and Harmony.”

“What is different about this year’s festival is that we put more emphasis on ‘sharing’ as a main theme,” said Park Mi-jung, an official from the Seoul Metropolitan Government, which helps to organize the event. “That is one of the reasons why Kim Jang-hoon, a pop singer famous for his charitable donations, was chosen as an honorary ambassador for the festival.”

The venue hosted numerous charity events this year such as World Vision’s “Small Coin, Big Love,” where a 30-meter (98-foot) coin field was set up in which visitors could throw coins in for donation.

At one location, ChildFund Korea collected money to purchase bicycles as part of its “Dream Bike” campaign for children in impoverished areas of Africa and Southeast Asia. At another, a booth raising money for multicultural families sold food items popular among foreign spouses of Koreans.

Aside from the charity work, active participation from 59 embassies was an interesting aspect, as many diplomats were eager to promote their home cultures and interact with Koreans.

“I have participated in the Seoul Friendship Fair since 2005 and I think this gives us a good opportunity to show Koreans that Latin American culture is not all about football or wine, but that we also have a rich history, including the Mayan civilization,” said Rafael Salazar, the ambassador of Guatemala. “Compared to other international fairs, the festival stands out from the rest due to its vast participation, including embassies and visitors.”

The international cuisine proved especially popular among visitors and provided an opportunity for people to bond with foreign officials.

“The German culture booth offered our famous pairing of sausages and beer,” said Ulrike Lebender, third secretary from the German Embassy in Seoul. “It was a breath of fresh air to interact with Koreans interested in Germany, especially speaking in German.”

One of the fair’s most loyal supporters is Gavin Mackay, the owner of Gavin’s Sausages, who immigrated to Korea in 1984 from Scotland. He proudly claimed himself a pioneer in introducing European sausages to Korea.

For some participating countries, the fair proved to be a valuable opportunity to more officially promote products for export.

“The festival allowed us to introduce Colombia’s famous exports, including natural products such as coffee and fruits,” said Jamie Cabal, the ambassador of Colombia.

“This was a particular draw for children,” said Terri Hartman, SIWA’s president. Some participants said that more events for children were needed in the program, especially as it was organized to coincide with Children’s Day, a national holiday during which families venture out to special events with their little ones.

“As a mother with a child, even with the International School Children’s Painting Exhibition, there was a lack of entertainment geared toward children,” said Ha Yan, a homemaker from Sadang-dong, southern Seoul.

Still, most found the event valuable for the yearly cultural exchange it provides, regardless of how they decided to partake in the event.

“As a foreigner, it was a new experience for me since I have never been exposed to so many different cultures, such as Mexican traditional outfits,” said Fidzuan Kassim, president of the Malaysian Students Association in Korea.

Miguel Gomez, an English teacher from Canada, said the weekend was more varied than any he has experienced back home.

“This festival includes a lot [of] different world cultures, while festivals in Vancouver are more regional-specific,” he explained.

And Narat Vidyananda, the first secretary from the Thai Embassy in Seoul, summed up the experience in a way that would certainly delight organizers.

“The festival is getting better annually, and similar events should take place outside of Seoul as well,” the diplomat said.