Hyun Bin is on break from military service

Hyun Bin is on break from military service 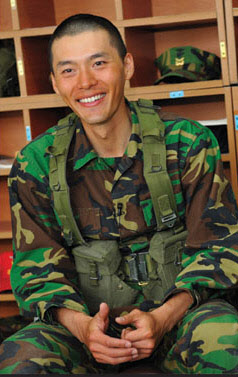 Hallyu actor Hyun Bin, who is currently undertaking his mandatory military service in the Marine Corps, has been released for a well-deserved 10-day break.

AM Entertainment confirmed on May 5 that its talent was indeed on holiday starting “from early this month.” The agency also said that it had no idea the star was on break until it scanned the news.

“We don’t usually let others know about breaks from the military. As far as we know, Hyun Bin is spending his time with friends and family until he returns to the Marines next week.”

Hyun Bin has been with the Marines since March last year and will be discharged this December.

Last year, as part of his duties, the Hallyu actor visited Indonesia to promote the Korean military, and even earlier in that year the Marine Corps made a promotional photo book capturing Hyun’s military life.