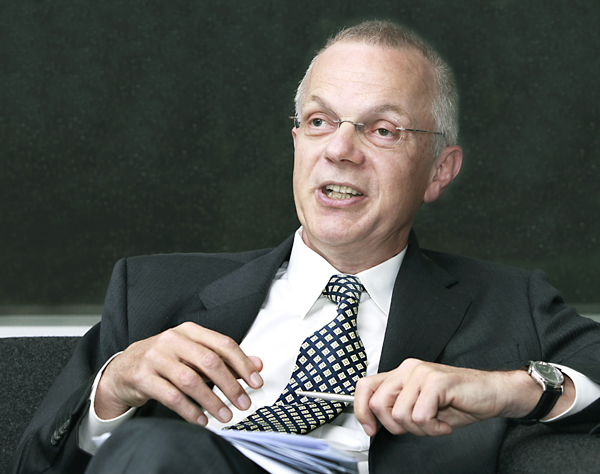 Paul Menkveld, Dutch ambassador to Korea, shares details about the Netherlands’ participation in the upcoming Yeosu Expo. By Park Sang-moon

A distinguished guest from the Netherlands will visit Korea for a special event during the three-month Yeosu Expo kicking off this Saturday.

“We’re very much looking forward to having our special guest, a member of the royal house,” said Paul Menkveld, Dutch ambassador to Seoul, in a recent interview with the Korea JoongAng Daily. It is the first time the Embassy has disclosed the news, although the name of the guest has not been made public.

“The official notice hasn’t been published yet and it still has to be confirmed, but it’s our intention,” he said.

The ambassador added the royal’s visit is to the Yeosu Expo only and it is “unlikely that the guest will schedule other visits in Korea because it will be a short visit.”

The king and queen of Sweden will also be visiting the Yeosu Expo and Denmark will send a crown prince and princess.

The Expo has designated June 18 a special day for the Netherlands, and a number of special events will be held including a performance by Wouter Hamel, a popular Dutch pop singer, and a visit by a business delegation.

The ambassador said the business delegation will hopefully be led by a member of the government at the ministerial or deputy ministerial level. “We expect quite a number of businesspeople related to the area of water and agriculture.”

The theme of the Netherlands’ pavilion is “Sustainable Dutch Deltas,” which is in line with the main theme of the overall event, “The Living Ocean and Coast.”

The Dutch pavilion is focused on Holland’s water management techniques and water sustainability.

Erik van Uum, commissioner of the Netherlands for the Yeosu Expo, said, “We have gathered knowledge over time, which will be displayed at our pavilion.”

When it comes to water management, Menkveld says the Netherlands and Korea have much in common.

“It’s interesting to see the efforts Korea is putting on proper water management policies like the four major rivers restoration project as part of flood protection,” he said. “The emphasis of Korea on green growth, which includes proper water management, is also very good and in that sense, we can learn from each other.”

The ambassador added that Korea has some very good technologies and interesting policies related to green growth like getting energy from waves and wind, and there could be good cooperation in the area with his own country.

“In general, the ties have increased incredibly over the last decades because we started with not very intensive ties. In 1961, the trade was very limited,” he said. “We only started to have a diplomatic presence in the 1970s, both from Korea in the Netherlands and Netherlands in Korea. But now, Korea is a substantial partner for the Netherlands and we are that for Korea in terms of political cooperation, economic cooperation, cultural exchanges and student exchanges.”

Last year marked the 50th anniversary of diplomatic ties between the two countries.

According to Menkveld, there are around 40 Dutch companies with production, sales or research and development facilities in Korea including well-known brands like Philips and Heineken. There are also small companies engaged with Korean business in various sectors including agriculture, energy and architecture.

The Netherlands will host the 2014 Nuclear Security Summit, which was hosted by Korea this year.