For KDIC, cleanup comes at a price

For KDIC, cleanup comes at a price 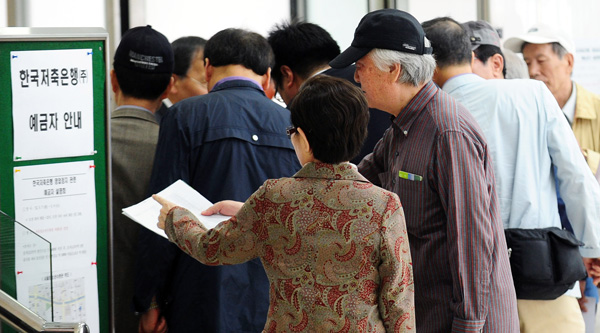 The KDIC is expected to incur several trillion won in more debt to clean up after the closed banks.

Customers of suspended savings banks are entitled to get their government-guaranteed deposits of 50 million won ($43,950) or less and the KDIC pays out these guarantees. It also buys up the suspended banks’ debts and recovers the costs by auctioning off savings banks’ assets. However, the KDIC had already used up more than 15 trillion won in pre-borrowed funds to pay off the costs of 16 savings banks suspended last year. 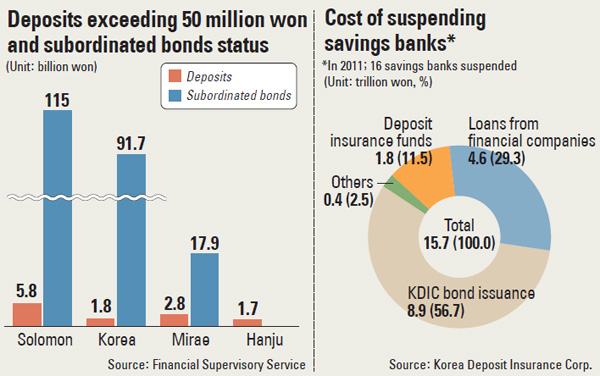 However, the KDIC has already spent more than 15 trillion won cleaning up the suspended savings banks, and needs to borrow more.

“We have roughly 10 trillion won left [to borrow] in lines of credit with financial companies,” said Choi. “With this, we can secure the funds to pay the government guarantees and other obligations of the four suspended savings banks.” In fact, KDIC’s debt level jumped by nearly 50 percent to 40.5 trillion won in 2011, while assets remained at 22.7 trillion won.

“About 30 to 40 percent of assets are recoverable when a savings bank fails,” said a KDIC official. “It’s not easy to repay [the costs] with the current levels of incoming funds, and there needs to be special remedies such as extending the lifespan of the special deposit insurance pool for savings banks.”

The damage to buyers of low-priority subordinated bonds is expected to be worst since refunds on those investments are not guaranteed by law. Last year when financial regulators suspended savings banks including Busan Savings Bank, bond holders got burned. According to the Financial Supervisory Service, some 7,200 investors bought 224.6 billion won in subordinated bonds at the respective savings banks. As the priority of these bonds is low, investors could never recoup their investments.

Many of the investors are senior citizens who invested their retirement money in subordinated bonds because they offered high interest rates.

Once again the morals of the savings banks’ managers have been questioned after it was known that Kim Chan-kyong, Mirae Savings Bank chairman, not only lied about his academic background but also spent clients’ money for personal use.

Kim said he graduated from Seoul National University’s law department when in fact he only attended up to middle school. Kim is currently suspected of illegally using 150 billion won of customers’ money to buy a golf resort in South Chungcheong, Kim was caught while trying to flee to China with 20 billion won of the bank’s money. Lim Suk, chairman of the nation’s largest savings bank by assets, Solomon, is accused of deliberately bankrupting a subsidiary to make away with 3 billion won in dividend payments and listing his wife as owner of a 4-billion-won apartment.

Political circles are already showing some signs of demanding that the financial regulators take responsibility for such misdeeds.

In just a year, more than half of the top 10 savings banks by assets have crumbled under the regulators’ scrutiny. Experts say one of the biggest problems was that the government was busy trying to build up the savings banks market since the early 2000s by loosening regulations and it failed to evaluate and monitor irregularities. After the local financial market was crushed by the unprecedented financial crisis of late 1990s, the Kim Dae-jung administration decided to allow credit finance to change its name to savings banks. The aim was to restore the credibility of the credit finance companies, which was damaged during the financial crisis. Furthermore the Kim’s administration raised the level of deposit insurance from 20 million won to 50 million won.

The promotion of savings banks was further pushed under the Roh Moo-hyun administration when the government lowered the bar on regulations, allowing massive loans to be easily handed out and savings banks had few requirements regarding their financial health. Even under the incumbent Lee administration, financial regulators responded slowly for restructuring of the savings banks industry even when signs of insolvency were already being detected.

“The government and the financial regulators aren’t free from blame for failing to closely monitor and detect irregularities,” said an analyst at a brokerage firm who requested anonymity.