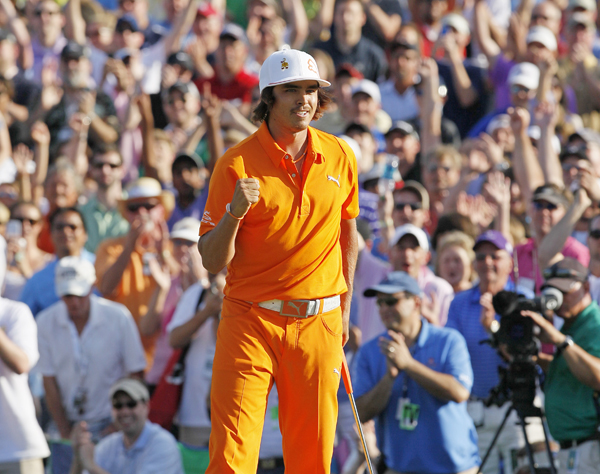 
CHARLOTTE, North Carolina - Rickie Fowler finally picked up his first PGA Tour win Sunday in what might be the start of a rivalry for years to come.

Fowler brought style and substance to a sudden-death playoff at Quail Hollow and delivered a clutch shot - a wedge into four feet to birdie the 18th hole and win the Wells Fargo Championship over U.S. Open champion Rory McIlroy and D.A. Points.

The 23-year-old Fowler has been talked about as the next American star since he turned pro with his flashy colors and all-orange outfit - his trademark - on Sunday. Now he has a trophy to back up the hype, coming in his 67th start as a pro on the PGA Tour.

And he beat the 23-year-old McIlroy to do it.

“I’m looking forward to playing with Rory for a long time,’’ said Flower, who closed with a 3-under 69. “It’s awesome. It’s a long wait, but well worth it.’’

McIlroy established himself on the same green two years ago, as a 20-year-old who closed out a record 62 by making a 40-foot putt. This time, it was Fowler’s turn.

Along for the ride was Points, a 35-year-old who had the tournament in his grasp until ending 40 straight holes without a bogey by making one at the worst time. He had a one-shot lead going to the 18th in regulation, hit his approach in a bunker and never came close to a par.

McIlroy had a shot at winning in regulation and missed a 15-foot birdie putt.

In the playoff, all three hit the fairway, with McIlroy hitting a 3-wood that traveled nearly 340 yards. Fowler’s wedge covered the flag and spun some four feet away. Points went long and did well to two-putt for his par, making the second one from 12 feet. McIlroy hit his wedge well right of the flag and had to work hard for a two-putt par.

That set the stage for Fowler, and he wasn’t about to let this chance get away.

Even though they’re the same age, McIlroy has a two-year head start on Fowler. They were in the Walker Cup together in 2007, and McIlroy turned pro that fall. Fowler didn’t turn pro until two years ago.

The only other time Fowler won as a pro was last year at the Korea Open, where he also beat McIlroy.

Fowler and McIlroy both recovered from late bogeys.

Fowler had the outright lead until he went bunker-to-bunker on the 16th hole, the second time drawing a plugged lie, and missed a 10-foot par putt. He had a 20-foot birdie putt on the last hole, though it never had a chance. He was the first one in at 14-under 274.

McIlroy went long of the green on the par-3 17th and missed an eight-foot par putt, but when Points struggled on the 18th, McIlroy had a putt for the win. McIlroy closed with a 70, while Points had to settle for a 71.

Fowler already is one of the more popular figures on the PGA Tour, especially with kids. He raced motorbikes, just like his father, as a kid until devoting himself to golf and the swing he fashioned on a practice range in southern California. The gallery was loaded with kids and their flat-billed caps, some of them dressed head-to-toe in orange.

This time, he gave them something to cheer for.

For all his endorsements and marketing prowess, Fowler was starting to hear whispers about when he was going to win. Making it even sweeter was having his mother, Lynn, and girlfriend Alexandra Brown (daughter of former PGA Tour winner Olin Browne) in the gallery.

“I’m over the top,’’ his mother said, fighting back tears. “I’m relieved for him because this is an expectation form the people, the fans, the tournament staff directors. And now he can hopefully carry on and do the work that he likes to do.’’