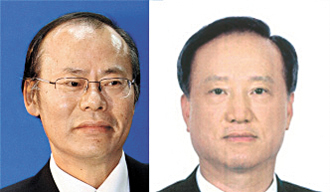 Nam Joo-hong, a foreign affairs and security expert who was forced to give up a ministerial post in 2008, was appointed the first deputy director of the National Intelligence Service and will oversee international and North Korea-related operations.

“His specialties in security and North Korean affairs were taken into account,” the Blue House said in a press release.

In December 2007, Nam joined then-President-elect Lee Myung-bak’s transition committee. After the presidential inauguration in February 2008, Lee named Nam to be the first unification minister of his administration, but the appointment faced fierce protests from the National Assembly.

In addition to snowballing criticism over his wife’s alleged real estate speculation, Nam was also condemned by liberals for his hard-line stance toward North Korea.

Attacks were also directed at his son for keeping his U.S. green card, which could lead to exemption from military service. Days after the controversy, Nam declined the ministerial nomination.

Asked if there was any specific reason for Nam’s appointment to the second-highest position in the NIS, the Blue House said it was part of a routine shake-up.

“It was to give him an opportunity to utilize his specialties,” a presidential aide said. “Nam had also served in the intelligence agency.”

The appointment, however, came abruptly because Nam was appointed as South Korea’s ambassador to Canada less than a year ago.

His predecessor at the NIS also served as first deputy director for just about a year after his appointment in April 2011.

President Lee also promoted Cha Mun-hee, a veteran intelligence official, as the second deputy director of the NIS. He will be in charge of domestic intelligence operations. The Blue House said he has served in the intelligence agency since 1979.

Kim Eung-gwon, a director of the Ministry of Education, Science and Technology, was also promoted to first vice minister, and Lee Gang-deok, commissioner of the Seoul Metropolitan Police Agency, was appointed as head of the Coast Guard.