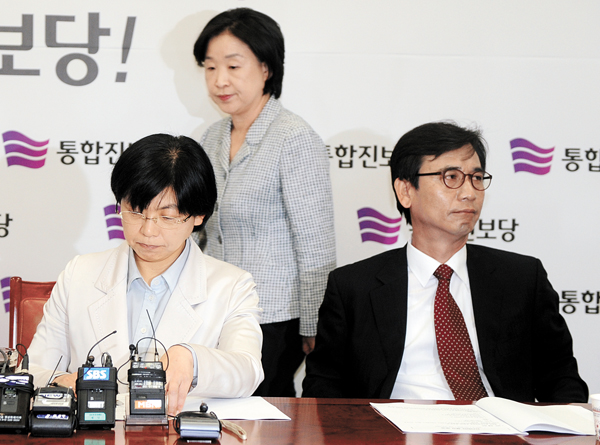 
The internal strife in the liberal Unified Progressive Party continued with the leader of the party’s largest faction demanding a vote on whether the candidates elected in a rigged primary should step down.

Lee Seog-ki, a UPP member who won the most votes in the primary to choose proportional representatives in March, issued a statement yesterday demanding a party-wide vote on whether he and another representative should resign. A third elected representative, farmer-turned politician Yoong Geum-soon, stepped down Friday.

“I ran in the proportional primary, not by the nomination of the leadership but by the choice of party members,” Lee said in the statement. “The resignation of party members should be determined by their hands. I request a vote of all party members.”

The UPP, the country’s third-largest party which won seven geographic constituencies and six proportional seats in the April general election, has been thrown into turmoil by the rigged primary. An internal probe showed that voting online and at polling stations was rigged. Three proportional representatives were elected in that election, and the remaining three were appointed.

Two of its three co-chairs said they will take responsibility and advised all the candidates who ran in the primary to stand down, including the one who did not receive enough votes to get an assembly seat.

At the center of the controversy is the Gyeonggi Dongbu Alliance, a regional chapter of the Association for Democracy and Reunification of Korea, established in 1991 by members of the National Liberalization Group, the largest faction inside the UPP. They are mostly former left-wing student activists who support North Korea’s juche (self-reliance) ideology.

Analysts said the faction members are desperately trying to keep Lee Seok-gi in the National Assembly. The other elected member, Kim Jae-yeon, also publicly said she wouldn’t leave her position and demanded a reinvestigation.

“We demand a thorough reinvestigation and a public hearing to verify the report of an internal probe team,” Co-Chair Lee said at a party meeting yesterday.

“The suggestion by the party’s leadership and members [that the representatives resign] is based on the unilaterally announced report made by the internal probe team and public opinion about the UPP.”

But Go Yeong-sam, one of the party’s internal probe team members, yesterday wrote on the party’s Web site that the primary was a fraud.

Saying it was shocking that members of the main faction blocked other party members from entering the National Assembly on Saturday, Co-Chair Rhyu indicated there were apparently skewed votes.

“The point of this matter is we can’t trust the electoral roll,” Rhyu said.