Those earbuds can be hazardous to your safety

Those earbuds can be hazardous to your safety 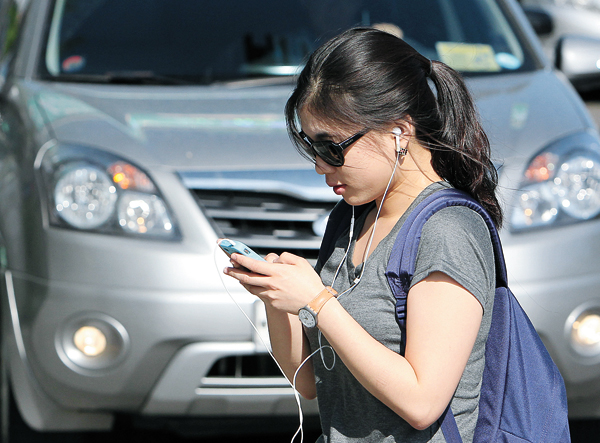 A woman wearing earphones gazes into her smartphone while crossing the street in Sinchon, Seoul on May 3. By Kim Do-hoon

Last September, an 18-year-old boy surnamed Shin was hit by a train on tracks near Janghang Freight Station in Seocheon County in South Chungcheong, and died instantly. A pair of his friends following him yelled to warn him but Shin was busy listening to music on an MP3 player.

“The train was running at only 63 kilometers per hour [39.1 miles per hour],” a police spokesman said, “but the boy was looking down and concentrating on the music.”

In 2009, a high school girl listening to music with earphones got swiped by a passing truck on a two lane road in a village of Gokseong County, South Jeolla, fracturing her left wrist.

“It was a small village that doesn’t have much traffic, but the accident happened because the girl was careless,” a police spokesman said. “Students listening to music MP3s or using cell phones that have Digital Media Broadcasting [DMB] must be careful when they walk on the streets.”

Last week, seven members of the Sangju City Hall Cycling Team training on a two-lane stretch of National Highway No. 25 in Euiseong County were struck from behind by a van, which was rear-ended in turn by a 25-ton truck.

Three of the team members were killed and four others were severely injured. The truck driver was watching DMB installed on his dashboard navigation system.

Digital entertainment is distracting both pedestrians and drivers, and is even giving a spike to total traffic accident statistics.

According to the Samsung Traffic Safety Research Institute, people being fatally struck by vehicles in the last five years have accounted for 36.1 percent of all traffic accidents, which is almost twice the average of the OECD countries’ average of 17.8 percent.

“Young people in their teens and 20s frequently use electronic devices with earphones, causing an increase in traffic accidents recently,” Park Cheon-soo, a researcher at the Samsung traffic institute told the JoongAng Ilbo. “We need to pass laws that stop drivers from watching DMB and pedestrians from using electronic entertainment devices that need earphones.”

According to KoRoad, or the Korea Road Traffic Authority, a state-run traffic research organization, the number of people killed or injured from traffic accidents had decreased from 34,795 in 2000 to 21,041 in 2005, but has increased since then.

“The number has been increasing recently because more and more young people have been using electronic devices on the street,” Han Sang-woo of the traffic control department at the National Police Agency told the JoongAng Ilbo. “If a person listens to music with earphones on, they can’t react quickly to any unexpected situations.”

In 2011, a New York state senator proposed a bill that fined pedestrians using cell phones or electronic devices while they crossed streets, but it was never passed.