Friday to Sunday: Lotte Hotel Jeju collaborated with Hello Kitty producer Sanrio to develop a character room one year ago, and in celebration of the one-year anniversary of the event, the hotel offers a Hello Kitty cafe package. The Lounge cafe will be full of Hello Kitty items for only three days. Guests can enjoy drinks served in Hello Kitty cups along with Hello Kitty strawberry mousse cake. They will also receive a cell phone case.

Hello Kitty-themed rooms will also be available during the promotion period. The rooms’ sofas, beds and coffee tables will all be adorned with pink characters. A room package includes one night’s stay, breakfast for two adults and one child and a hands-on experience for the child.

To Sunday: The Shilla Seoul’s cafe and terrace restaurant, the Parkview, offers a Family Week event. On the menu, there are wide range of foods for both parents and children to enjoy. There is steamed abalone, European-style beef, Hong Kong-style dim sum and short ribs for adults. For children visiting with their parents, choices include lobster, macaroni and fresh fruit smoothies.

May 15: Renaissance Seoul offers some special deals during its Teachers’ Day event. At its buffet restaurant Cafe Elysee, a minimum of four people, including the teacher, can sample from 120 different dishes. At the same time, the hotel’s bakery will offer wrapped items such as coffee, tea and wine sets as gifts for teachers.

May 15 to June 15: The Grand Hilton Seoul opens its newly renovated rooms to the public for the first time with its Hilton Renovation Packages and Trial Stay event. The package can be applied to stays in deluxe, junior or executive suites. Regardless of the room type selected, all package guests will get a signature cake from the Alpine Deli along with sparkling wine and a cheese plate.

A related competition is also currently running on the hotel’s Web site. Visitors who leave comments about why they would like to stay in the renovated rooms will be entered into a draw, and 10 lucky guests will be awarded a special summer package from the hotel. 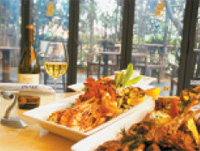 To May 31: The Ritz-Carlton’s The Garden offers a California-style menu, which includes an outdoor barbecue, during the month of May. The hotel has invited chef Matt Greco from Wente Vineyards for the promotion. This year marks the 100th anniversary of Wenti Vineyard’s chardonnay, and the chef has selected a variety of items to complement the wine. The menu includes grilled lobster and prawn. The meals are priced from 53,000 won to 120,000 won.

To Sept. 22: Novotel Seoul Ambassador Gangnam has opened its outdoor terrace and unveiled a special promotion to attract customers. Unlimited beer and two special drinks can be enjoyed with the barbecue.