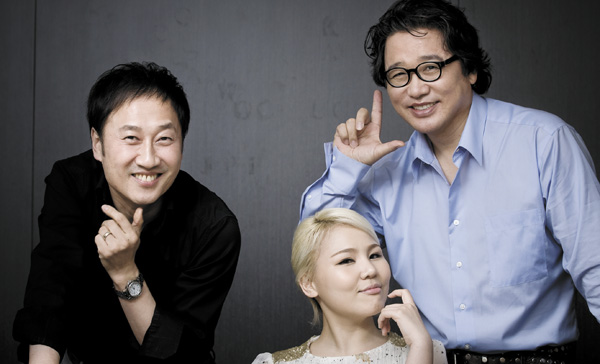 
Folk singers Choi Sung-soo, 52, and Yoo Yeol, 51, are rare constants in Korea’s fast-paced music scene. While K-pop bands come and go, the two men’s traditional ballads have a timeless feel with a reliable fan base.

Choi made his debut in 1983 and has been friends with Yoo for a long time. He rose to fame in the 1980s with his hit songs “Accompany” and “Puppy Love,” while Yoo won grand prize at MBC’s “Campus Song Festival” in 1986. With similar tastes and performance styles, the two came together in a kind of professional love story.

“I approached Choi in 1986 and asked him, ‘Can we be friends?’?” Yoo said last month at Choi’s studio. He admitted to closely admiring his counterpart, who is a year older.

But the two aging singers decided to mix things up and bring a younger performer into the picture this year. They performed at the “2012 Chungchun Younga 2 Concert” yesterday together with 28-year-old soul singer ALi, who is best known for her performances on the singing competition show “Immortal Song 2.”

In an interview last month with the JoongAng Ilbo, the three shared anecdotes about their careers and how they met.

When Choi first noticed ALi on her reality television program where she has famously performed Cho Yong-pil’s “A Leopard of Mt. Kilimanjaro,” he said he got goose bumps.

“Everywhere I went, ajumma [middle-aged Korean women] were talking about ALi’s performance on the show,” Choi said. “I guess the fact that ALi, who is so young, can touch people’s hearts with her mature style of singing, is something that amazes people so much.”

The talent Choi saw in ALi was hard to pass up, and he asked her to become an adjunct professor at Jangan University, where he is dean of the Department of Applied Music. ALi already works as a part-time professor at several other universities, including Howon University, Paekche Institute of the Arts and Seoul Art College.

Yoo’s relationship with ALi is more developed than Choi’s because he met the young singer during a performance by Jang Pil-soon a few years ago and kept in touch since.

The friendly intimacy between the two was immediately apparent during the interview.

Yoo, for one, does not call ALi by her name but instead by nicknames that he has created. Yoo often calls ALi “blonde-haired queen,” referring both to her blonde hair and the fact that she appears mature for her age because of the strong passion she has for music.

Choi seemed equally as impressed with ALi’s performance style, which is not unlike that of his and Yoo’s.

“Although ALi is many years our junior in the music business, her talent and way of interpreting songs are quite respectable,” he said.

For her part, ALi recognized the instrumental role her time on “Immortal Song 2” played in her rise to fame.

“I think [the show] was the soil and I was the tree. Flower buds in trees die but come to life with soil and water. I think the show was like my soil,” she said.

ALi’s time in the spotlight, though short, hasn’t been without controversy. Last year, she was viciously attacked by netizens for the song “Na-young” in her first album. The lyrics told the story of a child rape victim named Na-young who had been all over the news. But the singer didn’t consult with the girl’s family before the song’s release. After the uproar, she gave an official and public apology in December in hopes of moving past the situation once and for all.

Her eyes are now set on seriously pursing her music career by following in the footsteps of Yoo and Choi, whom she says she has always admired.

And fans will almost certainly have the opportunity to see the three work together again sometime soon. During the interview, Yoo suddenly asked ALi to play a leading role in one of his production company’s musicals. All she could do was smile back shyly.