Are gaming consoles going way of the VCR?

Are gaming consoles going way of the VCR? 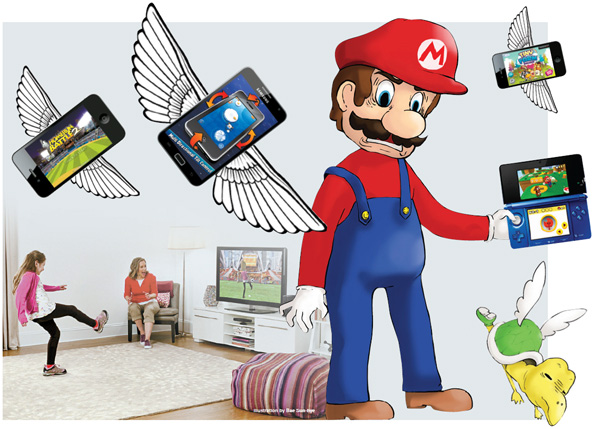 With the increased use of smartphones and tablets, which allow Internet-savvy consumers to work on the subway and even in the bedroom and bathroom, makers of traditional game consoles including Nintendo are losing their futures.

This was shown when Nintendo on April 26 reported its first-ever annual operating loss in 50 years as a public company, posting a deficit of 37.3 billion yen ($466.3 million) for the financial year that ended in March.

While there were several causes for the Japanese game maker’s poor performance, market analysts said a significant drop in sales of Nintendo’s hit Wii game console, its DS handheld console and its newer 3DS version can be blamed on Apple’s iPhone and iPad as well as Samsung Electronics’ Galaxy and Galaxy Tab, which are blasting their way into the handheld game market.

“With their versatile features and wide-ranging capabilities, multipurpose equipment such as smartphones and tablets will continue to cannibalize sales of consumer electronic items including digital still cameras and handheld gaming devices, culminating in the permanent eclipse of such traditional media-rendering gear by 2015,” said Pam Tufegdzic, an analyst at research firm IHS iSuppli.

“In the handheld gaming segment, the recent launch by Microsoft of its Windows 7 Phone and by Sony of the Xperia Play phone is a clear indication of how the two companies are taking share away from dedicated handheld gaming platforms like the DS from Nintendo.” Tufegdzic said.

Both Microsoft and Sony have their own console games brands: the Xbox and PlayStation, respectively.

When Nintendo’s Wii ruled the market in 2009, over 25.9 million units were sold worldwide that year. This year, it ended up selling 9.8 million units.

The slowing demand has also forced the company to cut the price of its $250 3DS - the newest version of the DS handheld console - by a whopping $80 after only five months on the market last August.

In 2011, Nintendo managed to sell 13.5 million units of 3DSes, 15 percent short of its original estimate. 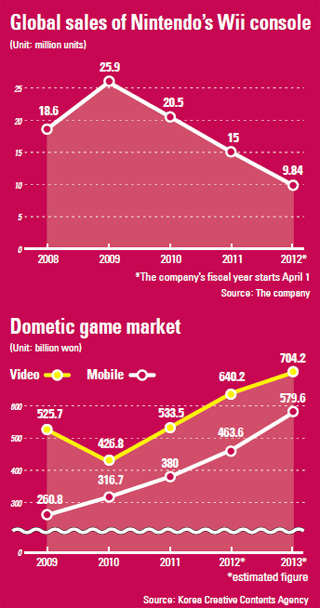 Come2Us, Korea’s first company to launch a mobile game business in 1999, plans to release over 40 different types of mobile games for both Apple and Android smartphones and tablets this year.

“Although online games are still popular in Korea, many people are finding utility in smartphones as a substitute for console games,” said Park Seong-jin, a spokesman for Come2Us. “Sixty four percent of our entire revenue, or 23 billion won [$20.3 million], was generated from smartphone games last year and we aim to increase that figure to 88 percent this year.”

Nearly half of Come2Us’s mobile game revenue was raked in from overseas markets last year, and it aims to reach 36.6 billion won in overseas sales this year over last year’s 17.6 billion won.

The company’s Homerun Battle 2 mobile game was ranked the No. 2 game of the year by Apple’s App Store Rewind 2011.

The firm had 42.6 billion won in sales last year, up from 24.4 billion won in 2009. It aims to release 40 games this year in partnership with small- and medium-sized developers.

London-based market research firm Games Investor Consulting estimates the worldwide mobile games market was $7.9 billion in 2011 and projects it will grow to $12 billion in 2013.

The boom in the mobile game sector has pushed online game firms and even Korean Internet portal powerhouses to strengthen their mobile game businesses.

Nexon, Korea’s No. 1 online game developer, aims to roll out some personal computer-quality game titles for smartphones and tablets. It is currently in the process of creating mobile versions of some of its hit online PC games.

“The two firms’ high market values reflect high estimation of future value and anticipation of the mobile market’s potential,” said Kim Chang-kwon, an analyst at Daewoo Securities. “Later this year, Nintendo is expected to release its successor to the Wii, the Wii U, and Apple is slated to launch the new smart device Apple TV. Korean mobile game firms can boost their values further by developing cloud- and convergence-supported games.”