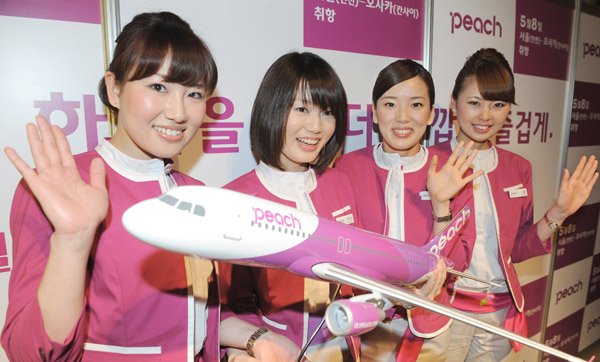 Peach Aviation, a budget Japanese airline, launched flights from Incheon to Osaka yesterday. The Japanese low-cost air carrier is a unit of All Nippon Airways, and it chose Incheon as its first international destination.

“Incheon International Airport has the ninth-most passengers among all the airports in the world, so it was natural for us to decide to fly to Incheon first,” said Shinichi Inoue, CEO of Peach Aviation yesterday at the press briefing at the Mirospace Theater in Jongno District, central Seoul.

“We plan to become the bridge that connects passengers traveling among Asian countries in the coming days.”

Starting yesterday, Peach Aviation operates nonstop routes between Seoul and Osaka every day. In July, it plans to run three flights a day.

For passengers who want to fly with the cheapest fare, Peach Aviation offers the basic fare as low as 75,500 won ($66) including fuel surcharge. Other fees including airport tax and a payment processing fee may be added.

However, to get any additional service from the airline, it will cost passengers extra cash. The seats will be automatically selected unless passengers pay to designate their own seats.

“There is a chance for families to sit apart when they don’t purchase the option of seat designation,” said Inoue.

Also, every checked bag will be charged a fee, and no food or beverage, including water, or in-flight entertainment, including music and movies, will be provided free of charge.

It is recommended by the airline that passengers double-check their flight schedules when making a purchase with Peach Aviation. The tickets are nonrefundable when you buy the cheapest ticket option. The upgraded ticket option, Happy Peach Plus, which starts at 111,200 won, will offer credit as “peach points,” which passengers can use on a later purchase if passengers decide to cancel their trips.