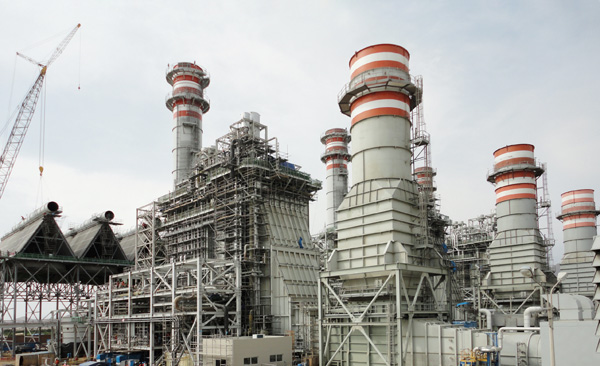 Latin America is becoming a new frontier for local builders as its oil-rich nations are tapping the expertise of Korean construction companies.

If it is realized, this would be the third biggest single overseas order won by Korean construction firms behind the nuclear power plant order in the United Arab Emirates and the great waterway project in Libya.

“Although it is an MOU, it’s likely to lead to a tangible deal,” said Shin San-sup, a director at the International Contractors Association of Korea. “The construction market in Latin America has been dominated by European and American firms and now the door has opened for us as well.”

Local construction companies won $59.1 billion in overseas orders last year, but 82.7 percent of them were in the Middle East and Asia. Latin America accounted for 11.2 percent, up from a mere 0.5 percent in 2004. The proportion grew to 5.3 percent in 2008 before shooting up to 11.2 percent.

Dongkuk Steel, Vale and Posco agreed last year to set up a joint venture to build an integrated steelworks. Posco Engineering and Construction will build a steel mill in the Pecem industrial complex in the Brazilian state of Ceara by 2015. Posco E&C also won a deal to build a power plant in Santiago, Chile, in 2007 and the Santa Maria II power plant project in Chile in 2010. 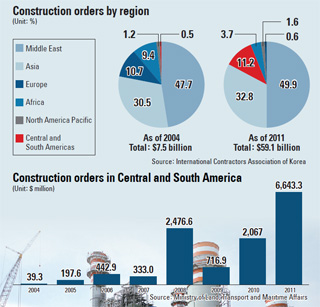 An integrated combined cycle power plant in Kallpa, Peru, built by Posco Engineering and Construction Provided by the company

Hyundai Engineering and Construction, the country’s biggest builder, has set up offices in Columbia and Venezuela.

With crude oil prices high, Brazil, Venezuela and Mexico have amassed great wealth. Chile, rich with lithium and copper, also has a lot of cash. Now they are making infrastructure and civil construction orders.

“Latin American countries such as Brazil, Venezuela, Colombia and Mexico have a lot of natural resources such as crude oil and iron ore, and there is a growing demand for infrastructure to develop the resources,” Shin said. “The Korean government and local builders are turning their eyes to Latin America while Korean builders’ reputations reached the continent through word-of-mouth.”

According to the International Contractors Association of Korea, the construction market in Latin America is expected to grow at an average of 11.8 percent annually for six years through 2014. It is the second fastest increase behind the Middle East, which is predicted to grow 12.1 percent in the same period. Brazil, in particular, will host the 2014 World Cup games and the Olympic Games in 2016 and is expected to invest in infrastructure.

According to the association, the country’s overseas construction market has become more diversified. The number of nations in which Korean firms won orders rose to 68 in the first four months of the year from 67 a year before. Local builders have won $10.5 billion of orders so far through April.

The government sent delegates to Honduras and Uruguay last year to tap business opportunities in relation to the countries’ plans to build ports. The government used official development assistance to help local builders win projects in Asia and Africa but it wanted to expand Korea’s construction business in Latin America.

A banker said the Korean government needs to increase financial support to match that of China and Japan in order to expand local builders’ presence in Latin America.

Chung Won-young, an executive at the Seoul office of BBVA, the Spanish banking group, said in a forum last month, “Latin American nations often have low credit ratings and it is hard for them to raise capital. That’s why they want constructions firms to raise funds by themselves from export-related financers in their own countries.”