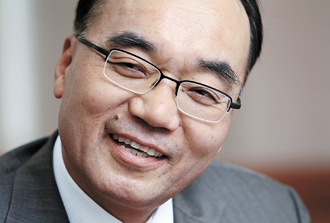 Minister of Strategy and Finance Bahk Jae-wan said the country’s conglomerates should not make excessive efforts to pass on wealth to succeeding generations in a recent interview with the JoongAng Ilbo at the Korea Federation of Banks. Bahk also discussed negative sentiment against the conglomerates in the country and said he hopes that people stop using the word chaebol.

Bahk has weathered numerous challenges as a finance minister. While many politicians pledged themselves to left-leaning ideas in the last few months, the ministry prevented most of them from being realized. Still, the Lee Myung-bak administration’s recent record for economic growth has not been good, even though Lee championed this cause from the beginning. Now, as Bahk struggles to close the gap between expectations and actual performance, concerns have swirled that the government is trying too hard to keep inflation at bay.

Q. There are still 10 months to go for President Lee. What is your goal at the end of the administration?

A. My goal is to raise the country’s sovereign debt rating to the AA level for the first time. It is important to manage external risks.

The public would not feel the quality of their life has improved even if the country’s rating is lifted.

I am aware of that. That’s why we are trying to control inflation.

There are many side effects from fighting the consumer price hike.

The government once tried to reduce prices by twisting the arms of businesses. Now we are trying to keep prices stable through systematic measures.

It sounds as if the government acknowledges that it went too far in reining in inflation.

It does not make sense if businesses benefiting from tariff cuts from free trade agreements raise their prices. After I said this, related businesses said they would not increase prices. Refineries said they would cut gasoline price by 100 won (9 cents). But this would not last long and it is not sustainable.

We were busy overcoming the aftermath of the global financial crisis and did not pay enough attention to mid- to long-term tasks.

What do you think of the result of the national election?

It is not appropriate for a minister to comment on elections. One day after the election, however, Fitch ratings said it would maintain a “positive” outlook for Korea’s sovereign debt rating. I hope the decision by the international credit rating agency answers the question.

The issue of economic growth was absent during the election.

Welfare policy arguments that the government should take care of the public from birth to the grave are getting more support. So I am concerned about a potential financial burden. Even if a right-leaning government takes power in the presidential election, it would likely be more left-leaning than counterparts in developed countries. Campaign pledges that are good for the economy are not good for winning elections. Thus, I am more concerned with economic growth.

It would weigh on the country’s finances if the government put its campaign pledges into practice.

The current administration is responsible for drawing up the country’s budget for next year, but it will likely be difficult not to be influenced by the presidential election scheduled at the end of this year. Even so, we can discipline the next administration by pushing the balanced budget plan. Under the law, it is hard to create a supplementary budget.

The important bills that are now pending at the National Assembly need to be processed during the current plenary secession.

Critics are questioning whether the government is willing to continue the market economy due to many regulations.

I cannot give you a unilateral answer. For every policy, we need a process to refer to the public opinion through open hearings and debates. If the situation becomes emotional or the media overreacts, policies and laws can be biased in one way or another.

There are already negative side effects from various regulations.

When policies are enforced, there are always some side effects. If there are more gains than losses, they may as well be enforced. Even if policies are believed to be valuable at a certain point, even though there are ultimately more losses than gains, they can be implemented as well.

Business bashing has spread in our society.

I hope that people stop using the word chaebol. There are more neutral expressions like ‘conglomerate.’ Even though Korea’s situation is unique, it is not right to bash large businesses by creating regulations.

People want to work for large companies but they also hate them at the same time. How can we resolve such irony?

Conglomerates should stop making excessive efforts to pass on their wealth to their children. It is good to succeed in family businesses, but they are trying to reserve a position for every child so they split companies and enter new areas of businesses. Inheritance tax is high and that is also a reason. But they should refrain and be more responsible.

One of the achievements of the Lee administration is that it managed risks well during the global financial crisis. Reforming the National Agricultural Cooperative Federation and the Korea Land and Housing Corp. is also something to praise the current administration for. If there are shortcomings, it neglected mid- to long-term tasks and winning the cooperation of the opposition.