3-way military drill would be a first

3-way military drill would be a first 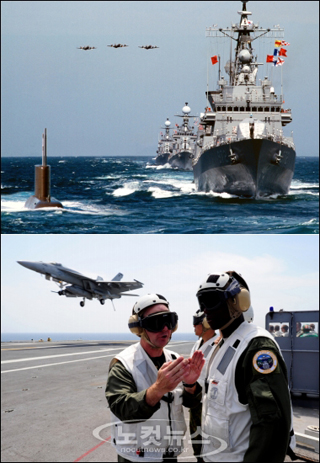 The defense chiefs of South Korea, the U.S. and Japan will have a trilateral meeting in Singapore next month, the second of such meetings since North Korea’s nuclear test in May 2009, and will discuss measures to strengthen deterrence against the North, including the joint military drill, the source said.

“As North Korea raises its threat of provocation, a consensus has formed that there needs to be closer military cooperation among the three countries,” said a South Korean government official.

“As far as I know, Defense Minister Kim Kwan-jin, U.S. Defense Secretary Leon Panetta and Japan’s Chief Cabinet Secretary Osamu Fujimura will hold three-way talks on the sidelines of the 11th Asia Security Summit to be held in Singapore on June 1-3, and will discuss a joint military drill,” the official said.

Kim was initially not scheduled to attend the summit, also known as the Shangri-La Dialogue, but he has rescheduled his participation as the three-way joint military drill emerged as a possibility, the official said.

The official said that South Korea and the United States have agreed to hold a three-way military drill along with Tokyo at the Security Consultative Meeting in 2010.

But the plan was delayed due to the negative public opinion in the South toward military cooperation with Japan, which colonized Korea from 1910 to 1945.

“The military leadership is judging that we need cooperation even with Japan when considering the heightened threat from North Korea,” the official said.

Kim is expected to visit Japan later this month to sign military cooperation treaties between Korea and Japan that have been discussed over the past two years.