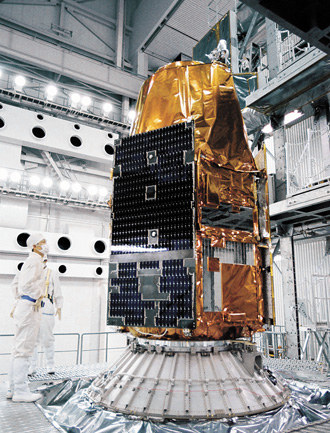 South Korea will launch a multipurpose satellite equipped with a high-resolution camera that can provide detailed meteorological observations of the earth from a Japanese space center next week, the government said yesterday.

The Arirang 3 satellite is scheduled to lift off at 1:39 a.m. on May 18 from the launch pad at the Tanegashima Space Center located south of Kyushu Island, the Ministry of Science and Technology said.

The satellite has an electro-optical camera with a resolution of around 70 centimeters that can give Seoul the ability to take precise pictures of weather front developments and the planet’s surface. The satellite is expected to stay operational for four years and can also be used to enhance national security, cope with natural disasters, better manage resources and monitor the environment.

The ministry said the Arirang 3, to be operated by the Korea Aerospace Research Institute, will be the country’s first high-resolution “sub-meter” satellite. At present, only a handful of countries in Europe and the United States have commercial satellites with such high resolution.

Seoul currently has the Arirang 3 multipurpose satellite with a one-meter resolution camera in orbit along with the Chollian geostationary communication and ocean observation unit.

The country plans to put five other satellites into orbit in the future such as the Arirang 3A, the Arirang 5 and Science and Technology Satellite 3.