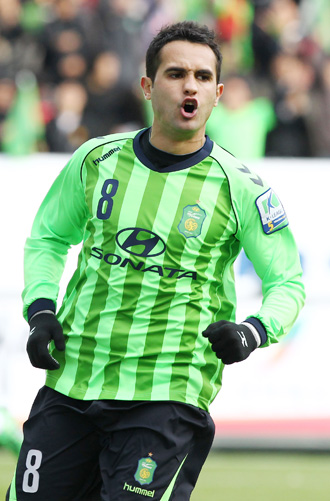 The Korea Football Association is planning to request that Jeonbuk Hyundai Motors’ Brazilian midfielder Enio Oliveira Junior, also known as Eninho, receive Korean citizenship. The move would make him eligible for a spot on the national football team prior to the final round of Asian qualifiers for the 2014 FIFA World Cup, a KFA official said yesterday.

Lee Won-jae, director of the KFA’s public relations department, told local media yesterday that the organization will help Enio obtain Korean citizenship through special naturalization after a request from national team coach Choi Kang-hee, who formerly guided Enio while he was in charge of Jeonbuk.

“With the request of Choi and Enio’s determination, we are planning Enio’s naturalization,” Lee said.

The revised immigration law that went into effect in May 2010 allows foreigners to carry dual citizenship if they are considered to have the talent to contribute to Korean society.

So far, four sports players, including basketball brothers Moon Tae-jong and Moon Tae-young, have received Korean citizenship through this law.

Enio first came to Korea in 2003 to play for the Suwon Samsung Bluewings, but went back to Brazil just a year later. However, he returned to the K-League in 2007 to play for FC Daegu and then moved to Jeonbuk in 2009.

The 175-centimeter-tall (5-foot, 9-inch) winger played a pivotal role in Jeonbuk’s K-League title last year. He has so far collected 66 goals and 48 assists in 173 K-League matches.

National team coach Choi said that he wants to include Enio in his lineup because he will provide an essential boost to the team’s performance.

“To join the national team after naturalization, he first needs to have talent that everyone should acknowledge as well as have pride in the country and an understanding of the nation’s culture and customs,” Choi said to Ilgan Sports, the JoongAng Ilbo’s sports daily, yesterday.

“Enio meets these conditions and it’s my job for the rest of players to get along with him.”

However, it’s uncertain that Enio will obtain his citizenship smoothly.

It was reported that the Korea Olympic Committee (KOC), who holds recommendation rights to the Ministry of Justice for the special naturalization of sports players, has already rejected the KFA’s request.

Instead, it decided to recommend Montenegrin striker Dzenan Radoncic, another candidate that the KFA originally asked the KOC for naturalization. The KFA insisted that it has withdrawn the recommendation for Radoncic because they later found that under FIFA rules, the Bluewings striker can’t play with the national team next month.

If the decision from the KOC is not altered, sources say that the KFA president could directly ask Justice Minister Kwon Jae-jin for help.