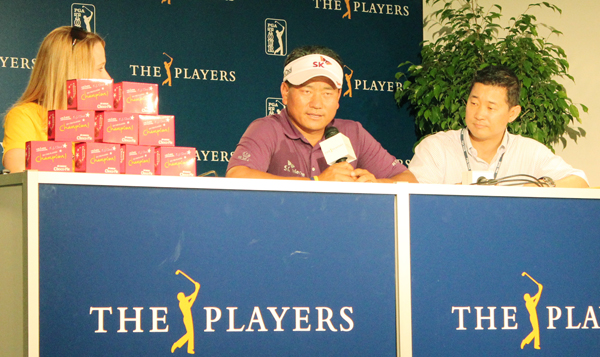 The defending champion of the Players Championship, Choi Kyung-ju (better known on the Tour as K.J. Choi), center, speaks during a news conference at TPC Sawgrass in Ponte Vedra Beach, Florida, on Tuesday. [YONHAP]


Choi Kyung-ju, better known as K.J. Choi on the PGA Tour, will look to rebound from his sluggish start to the season when the Korean golfer tees off at the Players Championship today, hoping to defend his title.

The South Jeolla native topped the field last year at TPC Sawgrass in Ponte Vedra Beach, Florida. Choi’s dramatic performance earned him the honor of becoming the first Asian golfer to win the Players Championship, which some call the “fifth Major.”

Last year, Choi started the first day slowly at 25th place and then jumped to 11th after the second round. Eight holes of the third round were postponed to the next day due to inclement weather, but he didn’t lose his rhythm and managed to tie for second place at 9 under. He finally shared the lead with David Toms at 13 under in the final round.

While Toms missed a three-foot putt on the par-3 17th, the first hole of the playoff, Choi came through in the clutch with a par and ended his winless drought that began after the 2008 Sony Open.

The world’s No. 28 golfer will need a similar performance to snap his lethargic start to the 2012 Tour.

In 10 PGA events this year, Choi has managed to finish inside the top 10 only once, when he shared fifth place at the Hyundai Tournament of Champions in January.

In the other nine events, the veteran has finished between 20th and 30th place once, between 30th and 40th place five times and less than 40th place once. For two events, including the Masters, Choi even missed the cut.

The 42-year-old explained that the reason why he has struggled this season is that he is trying new things to improve his game, such as changing his irons, but instead it backfired. Now that he has returned to his old playing style, the golfer said he is set to bounce back.

With the support of Choi’s Bois, a fan club that is comprised of six Americans, Choi said during a news conference on Tuesday that he feels welcome and is now ready for the challenge.

“I didn’t come here with the mindset of a defending champion, but rather to play with composure ,” Choi was quoted as saying by Yonhap News Agency.

“With more attention, I get motivated and get the energy to compete at a higher level.”

If Choi wins this year’s Players Championship, he will cement his name in the tournament’s history. Since the event was inaugurated in 1974, no golfer has achieved back-to-back titles.

Choi said he has enhanced his putting to perform like last year. However, he admitted that it won’t be easy to defend the title.

“This is the type of course where you have to concentrate on every shot,” said Choi, who will tee off his first two rounds with former champions Tim Clark, who won in 2010, and Sergio Garcia, who won in 2008.

“You have to set your expectations low and not ignore all the risks because one shot could be the end of the tournament.”

Choi will be one of 144 golfers in the world who will be competing for the sport’s largest purse: $9.5 million, with the winner taking home $1.71 million. The total purse is $1.5 million higher than each of golf’s the four majors.

While Masters champion Bubba Watson decided to withdraw from the event to spend some more time with his family, the world’s best have all joined to spoil Choi’s back-to-back ambitions.

World No.1 Rory McIlroy begins his game with Phil Mickelson, the 2007 champion and a World Golf Hall of Fame inductee, and veteran Steve Stricker. World No. 2 Luke Donald tees off with compatriot and No. 3 golfer Lee Westwood and Bill Haas.

Tiger Woods, who won this event in 2001, is matched with Rickie Fowler, the 23-year-old who earned his first PGA Tour victory on Sunday at the Wells Fargo Championship, and Hunter Mahan, the Tour’s only two-time winner this year.