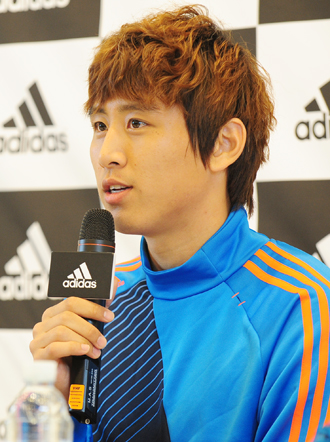 For Koo Ja-cheol, at least the second half of the German Bundesliga season with FC Augsburg could be called a success.

The 23-year-old midfielder was loaned to Augsburg from VfL Wolfsburg in January. While he sat on the bench in Wolfsburg, playing only seven games, Koo emerged as a top player in Augsburg with five goals in 15 matches and helped his club escape relegation.

As the German league wrapped up its season on Saturday, Koo returned to Korea on Tuesday and held a press conference at the Adidas showroom in southern Seoul. He evaluated his performance this season as a 100 on a 100-point scale because he knew that he had overcome his fear of failure.

However, Koo said now he is starting from zero with the London Olympics looming.

Korean men can earn exemption from their two years of military service if they win a medal in the Olympics, but for Koo, that isn’t the motivator for playing at the Summer Games. Since his father is a man of national merit, the former Jeju United player only has to serve six months regardless.

Although Wolfsburg coach Felix Magath reportedly said he does not want him to play at the Olympics, Koo said that he has expressed his will fully to the coach and is confident he will compete in London this summer.

Q. What do you think about your performance this season?

A. I know my season with Wolfsburg didn’t start well, but I learned a lot of things through that experience. I always played with the mindset that I will smile when I go back to my country. I feel appreciated since I was able to take advantage of the opportunities that came to me.

You said you are finally playing the football that you wanted play in Augsburg. What do you mean by that?

Since I was a young boy, I always trained with pride knowing that I’m a capable player. I still have a belief that I can’t still develop more, but in the German Bundesliga, that kind of confidence wasn’t expressed. However, after going to Ausburg, the coach acknowledged my talent and had belief in me. I wanted to play like I did in the K-League, and I think playing with Augsburg has provided me a stepping stone.

Among the goals you scored in Germany, which one remains in your memory the most?

All goals are meaningful, but I want to pick two. One is my first goal of the season, which blew away my fears of going back to the country empty-handed. The second will be the goal against Koln, which I scored from middle distance. It boosted my confidence.

Have you heard anything about your transfer next season?

I know Augsburg wants to sign me in a permanent transfer while Wolfsburg wants me to come back and prepare for next season with them. I also heard there is a third club that wants to sign me. But I haven’t yet confirmed my future and I need some time to think about it.

What do you think about Korea’s chance of emerging from the Olympic group stage?

I watched the group draw broadcast live. Like I did with the Under-20 national team, I want to feel the atmosphere of reaching the quarterfinals. What’s certain for me is that after playing in Europe and competing against various players, I have no fear of playing against European teams or other countries. I also expect we can advance further than the quarterfinals.

You are already exempt from two years of military service. Why do you want to play in the Olympics?

I still can’t forget the feeling that I experienced at the 2010 Asian Games. I want to feel the worth of achieving the goal after putting all my efforts forward.


Do you think you can also perform well with the senior national team?

In the K-League, I was the top player in assists. But now I score more goals than assists. I now have the desire and the confidence to score goals. I want to score against Spain and in matches like the final round of the World Cup qualifiers. I think the opportunities will come.