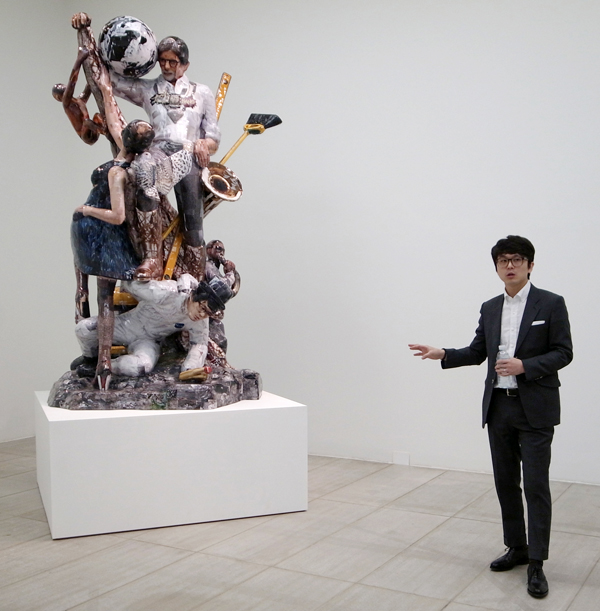 
Osang Gwon, an artist recognized as a pioneer of photography sculpture, is holding his first solo show in Korea in six years.

Some of the pieces, which Gwon calls his “Deodorant” series, depict individual human subjects. On display are three-dimensional models made with light materials such as Styrofoam covered with numerous photographs of models, taken at different angles under various kinds of light.

When taking pictures, Gwon pays painstaking attention to detail so that every element of his work is spot-on. For instance, in creating photo sculptures of British rock band Keane’s three members, whose images brought fame to Gwon among the public, he took between 1,000 and 3,000 shots of each member before beginning work. His sculptures were used as cover art for Keane’s third album “Perfect Symmetry” in 2008.

“When I take photos to make a sculpture, I don’t just have the model stand in a single pose that I have in mind, but rather consider alternative poses as well while shooting,” Gwon said during a press preview for the solo show on Monday.

A photo sculpture depicting British artist David Hockney, top, and “2011, December,” above, are also part of Gwon’s solo show that runs until June 24. Provided by the gallery

Then, Gwon uses the photographs to break down a person’s image by pose and angle before reconstructing it in his own style.

His production style has drawn comparisons to cubists, who were pioneers in modern art when they took familiar images and portrayed them in entirely different and unexpected realities.

In this exhibition, Gwon also uses images taken by other artists or amateurs in creating his sculptures, incorporating another person’s unique perspective in his representations.

An untitled sculpture depicting artist David Hockney is made of the photos Gwon found on the Internet and screen shots from a film about Hockney, which Gwon used to focus on the Briton’s backside.

“The wide range of images available online of a certain subject are together an accumulation of various perspectives on the subject from many different people across a wide time span,” Gwon said.

The Hockney sculpture, in particular, shows how the artist’s hair has changed as he ages. It also includes low-resolution images, leading to some peculiar visual effects.

Other works on display focus not on individual human figures but on combined shots of human bodies or animals in classic poses.

A 3-meter (9.8-foot) grand sculpture, which Gwon made at the request of an Indian hospital, is based on work done by 18th-century sculptor Balthasar Permoser. It features famous Indian actor Amitabh Bachchan on top and Gwon on the bottom, making it his first self-portrait, at least in part.

“I’m not parodying classic sculptures,” Gwon insisted. “I have always had respect and longing for them. Their poses truly show the beauty of the human body, and you will see very similar poses in magazines and on television.”