Rain talks about spending big in the Army

Rain talks about spending big in the Army 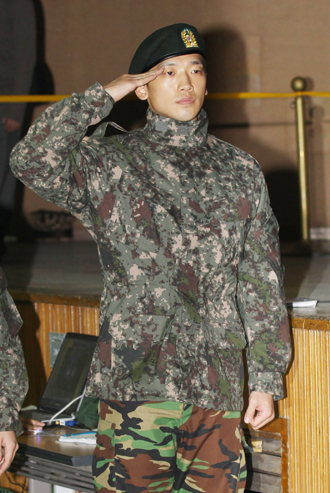 Singer Rain took part at a cultural festival for active-duty soldiers at the 306th Regiment of the Reserve Force Battalion in Uijeongbu, Gyeonggi on May 8.
At the event, he opened up about his spending habits, now that he is in the Army.

When he was asked just how much money he had, Rain deflected the question by saying, “Sorry, but I only want to talk about military-related issues.”
When the host tactfully asked how he was spending his monthly stipend of 80,000 won ($70), the Hallyu singer responded, “There’s really nowhere to spend the money on the base. I guess I spend most of it at the convenience store.”
Netizens had a good laugh at Rain’s comments, with many saying that Rain must be consuming a lot of Choco Pies, dubbed the favorite snack among soldiers at the barracks.

The festival is held each year to welcome fresh recruits to the Army as well as to thank the parents of those who have been conscripted.
By Carla Sunwoo [carlasunwoo@joongang.co.kr]