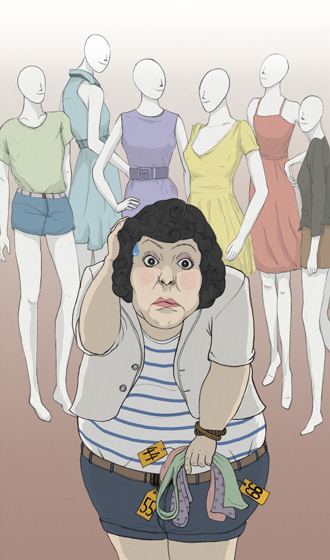 At an H&M branch in Myeong-dong, northern Seoul, Lee Jin-ja, 49, tapped her fingers nervously on the wall. Looking through a rack of pastel-colored spring tops, she asked her daughter, Kim Hyun-seon, 23, for some advice.

“Should I get the large size or the medium?” she asked, with her daughter replying that the large was “way too big” and made her look “fatter and older.”

Lee ended up at the cashier with the medium-sized blouse in-hand, Hyun-seon smiling approvingly.

“Even though my weight has mostly been the same, I’ve started to wear smaller sizes recently. My daughter and even my friends say that wearing larger, ajumma [a local term addressing middle-aged housewives] clothes makes you look older,” said Lee, who like many women her age is not the size of a fashion model and has a 29-inch waist.

“Actually, this is quite stressful for an ajumma like myself. Now it feels as though I have to start losing a lot of weight and do yoga or something.”

It seems Lee isn’t alone in feeling the pressure, as Koreans get more style-savvy with global brands popping up one after another on the Peninsula. In fact, at Shinsegae Department Store’s main branch in Myeong-dong, three of the most popular “boutique brands,” a Korean fashion term referring to brands that target middle-aged to senior citizens, Printemps, Shin Jang Kyoung and JR, have stopped selling their 77 size - or the equivalent of a large size in the United States.

Since this spring, these brands now only carry size 55 (close to U.S. women’s size two to four) and size 66 (close to U.S. women’s size six to eight), just like brands targeting younger women. Skirts have also been shortened to 10 centimeters (3.93 inches) compared to similar styles featured a couple of years ago and the sleeve openings have been reduced to 3 centimeters so that the silhouette is leaner and tighter.

These brands now sell items that do not differ much from those targeting women in their 20s or 30s, including skinny jeans and sheer blouses.

At Lotte Department Store, the women’s “young fashion” portion, which carries brands targeting people in their 20s to early 30s, expanded an average of 10 percent at each branch last year, according to Kang Sun-hee, general manager of the customer strategy team at Lotte.

She added that every fifth customer shopping in the young fashion area of Lotte branches are women in their 40s and up.

“In recent years, there has been a clear ‘down-aging’ trend in women’s fashion, where even senior citizens don’t want to look their age. Everyone wants to look younger and skinnier,” Kang said.

“This trend seems to have started when middle-aged Korean celebrities including Jang Mi-hee, Kim Hee-ae and Oh Yeon-su were featured wearing young, chic foreign brands and featured in the media commenting on their intense diet regimens,” said Lee.

“Even the boutique brands that still carry size 77 have substantially decreased the number of size 77 items in their shops as well as featuring clothing that is more minimal and contemporary compared to a couple of years ago.”

When these Korean women look to buy bigger sizes from foreign retailers, the story is pretty much the same. At global fashion mega brands operating in Korea, including H&M, Zara, Forever 21, Gap and Banana Republic, it is hard to come by plus size items for women, let alone U.S. sizes large and up.

At Banana Republic branches in Korea for example, the largest size available for women’s clothing is often a size six (equivalent to size 66). In Banana Republic stores in North America, a women’s size six is a small-sized medium, with sizes six and eight being labeled medium.

H&M in Europe and North America carry a plus size line called H&M Plus but no such line exists in Korean H&M shops. And the same goes for smaller retailers in Dongdaemun, with most vendors carrying size 66 as the largest option.

“We used to carry size 77 but stopped last year. It’s funny because our looser-fitting size 66 items are around the same size as our old size 77 items - but because they are labeled 66, they sell better than size 77 items,” said Jung, a store owner at Migliore in Dongdaemun.

So if clothing sizes for middle-aged women in Korea are getting smaller, does that mean these women are getting skinner?

Not according to government statistics on the average size and height of Korean women. Size Korea, under the Ministry of Knowledge Economy, states that the average height and weight for Korean women aged 40 to 49 in 2010 (their latest data) was 156.7 centimeters (5.14 feet) and 57.2 kilograms (126.1 pounds).

The first retail clothing size standard in Korea was introduced by the Korean Agency for Technology and Standards (now under the Ministry of Knowledge Economy), in 1981.

“The agency introduced a new system for women in 1990, in which retailers state the height, bust and hip measurement on garments. But it’s true that this wasn’t strictly enforced and many brands still go by the old sizing terms 55, 66 and so on,” said Kim Yong-seok, a researcher at Size Korea.

However, even though the average woman in Korea in 2010 stands taller with bigger body measurements, many local women’s clothing brands still go by the old sizing standards of 44 and up. Some retailers even say that compared to five or 10 years ago, the same sized clothing for women has gradually become smaller, with more women looking for smaller sizes.

“A size 55 or 66 clothing item now, for example, compared to five or 10 years ago, is a bit smaller and tighter compared to the same size five or six years ago,” said Kim Hye-yeon, public relations manager for local boutique brand Madam Polla.

“Generally speaking, the same sizes have gotten a bit slimmer-fitting over the years,” said a manager at TIME, the flagship brand of Handsome, one of the biggest fashion companies in Korea. “Because of the diet craze in Korea, even women who have size 77 measurements try to lose weight so that they can fit into a size 66.”

What’s a lady to do?

Unlike Lee Jin-ja at H&M, Kim Sun-mi, 45, said she gave up on shopping in stores these days for her size 77 frame. Instead, with the help of her daughter, Kim buys clothing from foreign brands and has them delivered to Korea via international shipping services operating here.

“I buy a lot of great, quality clothing from brands like J-Crew and Anthropologie online now. They have a much wider selection of sizes and designs compared to Korean brands and I don’t have to feel like a chubby failure when asking the saleswoman for a size 77,” said Kim.

“Even women who should wear larger sizes do not tend to buy their size these days because of the enormous pressure to be fit,” said Kim Hye-yeon of Madam Polla. “In the past, when Korea was a poorer country, clothing was more about function and affordability. But now, as Koreans become fashion-conscious, there seems to be a more high-pressure environment for women to fit in, loose weight and look young.”

Other disillusioned shoppers like Ahn Ae-ran, 42, said they refuse to buy size 77 clothing, even though they can no longer fit into smaller sizes. Instead, she said she occasionally splurges on size 66 items and tries to loose weight and fit into the clothing.

“I know .?.?. it’s like I live in denial,” Ahn said. “I know a size is just a size and people look better if they wear the appropriate size for them. But that logic doesn’t come through when you go out shopping and you rarely see a large size.”