GE wants to grow its presence in Korea

GE wants to grow its presence in Korea 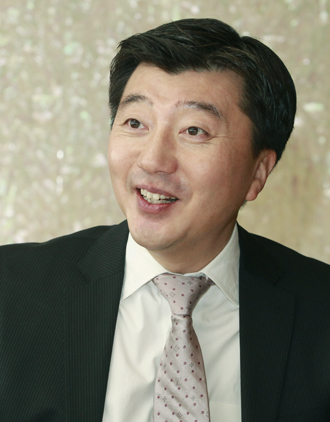 When he first got his job as CEO of GE Korea, Christopher S.W. Khang was given a special mission by GE Chairman Jeffrey Immelt: bring the global conglomerate more business from Korea.

“The chairman said he sees Korea everywhere but not within GE, which means GE Korea is still small,” the 51-year-old, who started the job five months ago, said.

At a New Year’s meeting where CEOs of overseas GE branches gathered to set goals, Immelt mentioned the various strengths of Korea, especially its strength in the information technology field, and said the veteran of Cisco Systems and Compaq Computer should explore them. “When I saw him in January, the chairman was very interested in Korea,” Khang told the Korea JoongAng Daily. “So, I pledged to prove how Korea can contribute to international business.”

GE has had a presence in Korea for more than a century, but its brand recognition remains low against local brands like Samsung and Hyundai.

“Our mission is to address global challenges by providing our technologies and making investments,” Khang said. “GE is involved not only in profitable businesses, but also businesses that are necessary to solve global problems.”

The company wants to be known as “an advanced infrastructure, technology and service company to solve the world’s challenges in energy, health care, aviation and capital.

“In the past, the focus of growth was on developing technology and products, but today, it has shifted towards striking a balance between business and the market it is operating in,” he said.

“What I need to do at GE as a growth-seeking CEO is to pursue a comprehensive growth of the local market, while expanding GE Korea’s operations,” he said.

Khang has been in the roller-coaster IT industry for three decades, experiencing frequent economic, social and political changes, he said.

He earned the nickname “the restructuring expert.”

Khang’s appointment has encouraged many GE Korea employees because he’s known to be aggressive, a GE official said.

Korea has other strengths besides those related to IT, Khang said.

Khang’s experience abroad has given him a global perspective. He suggested a somewhat global view for further development of the Korean shipbuilding industry.

Khang also aims to utilize the country’s IT ability for the health care sector. “It is not easy for most seniors to use mobile devices. Establishing an environment where such people can receive tele-diagnosis services is one of my tasks,” he said. “Korea is the most adequate market to implement pilot projects due to its outstanding infrastructure, including the world’s fastest LTE networks.”

With GE’s technologies and global networks, Khang plans to boost partnerships with local businesses. “GE could help them make inroads into new markets more easily via its well-established global networks,” he said. “Actually, GE Korea has been cooperating with outbound Korean companies since a few years ago. Much collaboration has been made in the engineering, procurement and construction (EPC) field.”

GE is noteworthy in Korea for its tough evaluation system by former chairman Jack Welch, which encouraged units to get rid of their bottom ten percent of employees.

“When we talk about the bottom 10, we should consider two axes at the same time: performance and potential,” Khang said. “There are some people who show good performances in the present, but don’t have further potential. And some are not performing well, but they show potential. It is a very hard job to evaluate employees correctly based on their performances and potential.”