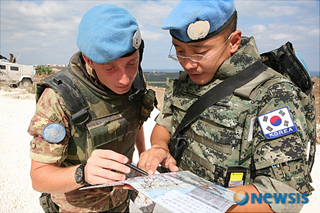 Korea’s plan to dispatch peacekeeping troops to South Sudan this year has become all but impossible, government sources told the JoongAng Ilbo yesterday.

Dissonance between government agencies is to blame for the delay, which could put Korea further behind its Northeast Asian rivals in a competition to increase its presence in the oil-rich African country, sources said.

Seoul decided last year to send an engineering troop to the eastern African country to help the country after it gained independence from Sudan in July last year.

The United Nations Secretary General Ban Ki-moon requested Seoul’s help, and the government stated answering the call would send a signal to the international community highlighting Korea’s transformation from an aid-recipient to an international donor. But Seoul is yet to break ground to build a base for the troops in South Sudan.

“The rainy season will start in [South Sudan] in late May, making it difficult to build a base,” said a government official.

The government hasn’t drafted a bill seeking parliamentary approval for the troop dispatch, either. The 19th National Assembly, led by newly elected lawmakers, will convene its first session in June, but even if the bill passes then, at least several months will be needed for infrastructure building, the official said.

“It is impossible to send the troops within this year,” the official said.

Japan promised to send a 200-strong Self-Defense Forces to South Sudan over the course of five years and its advance team arrived in the country early this year. China has nearly completed its preparation to send its troops to South Sudan.

Sudan, before it was split, had the fifth-largest oil reserves in Africa, and South Sudan has three-quarters of it. Diplomatic observers say support of peacekeeping activities by other countries is connected to diplomatic efforts to gain favor in the oil business with South Sudan.

The officials of the Ministry of Defense say the ministry has done everything it can regarding the troop dispatch and will wait for the Ministry of Foreign Affairs and Trade to act on it.