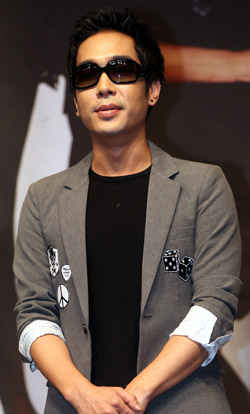 Ko Young-wook, 37, a former member of the 1990s pop band Roora, saw the girl for the first time on a cable TV program that aired on March 23, in which she starred as a hot girl working out at a gym and luring attractive male gym members.

It was a raunchy scene for an 18-year-old girl, but she gladly took the role. After seeing her on TV, Ko called the producer of the program to get her contact information.

Ko suggested they meet privately on March 30, and at around 2:30 p.m. at Hapjeong Station in Mapo District, western Seoul, they met.

Ko then suggested they move to his place in Hannam-dong, central Seoul, by convincing her that he didn’t want to be out in public. They got drunk on wine, whiskey and cocktails, and Ko forced her to have sex with him.

Ko has now been accused of raping the 18-year-old, the Yongsan Police Precinct in central Seoul said yesterday. The police have filed a warrant to detain Ko for questioning.

“It must have been hard for the girl to say no because Ko is a celebrity who had appeared on many popular TV programs recently,” a spokesman for the Yongsan police said.

Last Saturday, the two met again and had sex at Ko’s place. The two maintained their relationship by exchanging messages through KakaoTalk, but Ko suddenly rejected all of her calls and didn’t respond to her texts.

The police said they discovered the case through a teenage counseling center in Yongsan. The girl explained that she was hesitating to call the police as she was afraid of her parents finding out about her sexual relationship with Ko.

“I admit that I had sex with the girl, but it was mutual consent,” Ko said during questioning on Monday.

Sexual assault of girls wishing to be celebrities occurs often within the entertainment circle. In order to combat it, the Ministry of Culture, Sports and Tourism announced yesterday a set of measures to clean up the talent management industry in the country.

In April, a 51-year-old CEO surnamed Jang of Open World Entertainment was arrested by the Gangnam Police Precinct on charges of repeatedly sexually harassing, assaulting and raping female actresses and singers since 2008, which was the trigger case for the ministry’s movement. The ministry - along with the Korea Entertainment Producers’ Association and Corea Entertainment Management Association - said that it will initiate a comprehensive inspection of the talent management agencies.

The ministry says its data shows there are about 500 such agencies registered in Korea, but it believes there are actually 1,000. The ministry explains that currently there is no separate regulation concerning such agencies, so getting the exact picture of the industry is difficult.

“With the recent popularity of audition programs, an increased number of people want to be celebrities, but only a fraction of talent management agencies foster or manage celebrities systematically and professionally,” Kim Gap-su, director of the ministry’s content policy division, told reporters.

The ministry and related associations plan to investigate and analyze basic information and business portfolios as well as the celebrities they manage and their employee data. They also plan to create a database of such information - particularly of the managers, so that celebrity aspirants or their parents can easily check them out.

Most importantly, the ministry will push for new regulations concerning the creation of such agencies - such as the minimum requirements for assets, office space and employees - which have been absent until now.