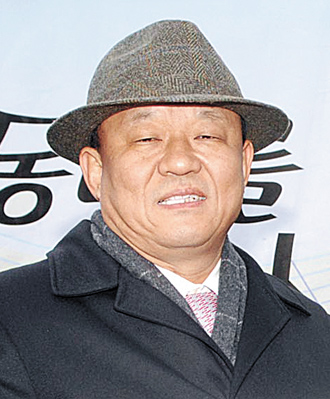 Prosecutors tentatively concluded yesterday that Kim Chan-kyong, chairman of the suspended Mirae Savings Bank, may have made up the story of being robbed of 5.6 billion won ($4.9 million) by a close friend. They think that money has been stashed away by Kim.

“We have reviewed what Kim has stated to us [that his friend stole 5.6 billion won] but we have tentatively concluded that his statement is hard to believe,” said an official from the Supreme Prosecutors’ Office yesterday. “There is a high possibility that Kim fabricated this whole plot with his friend and hid the money either in Korea or overseas.”

Following the closing of Mirae Sunday, Kim has been accused of misappropriating 200 billion won of the bank’s money and various other misdeeds such as lying about his education.

Kim was caught last Thursday at a port in Gungpyeong in Hwaseong, Gyeonggi, trying to flee to China after withdrawing 20 billion won from the bank.

On Wednesday, a local media organization reported that Kim and his friend loaded 10 boxes of cash worth 5.6 billion won into a passenger van April 7 and fled Seoul. When questioned about this earlier on this week, Kim told prosecutors, “I parked the van near a villa [my friend owns] and while I was asleep, my friend stole all the money.”

Prosecutors are tracing the money and the friend, who has been reported missing.

Kim said the villa was in Asan, South Chungcheong and the robbery by his friend took place between 2 a.m. and 4 a.m. April 8.

It appears Kim tried to enlist the aid of Asan police around that time.

According to the Asan Police Station, it received a call from the owner of a local Japanese restaurant surnamed Park on April 8 saying he was the victim of a theft. Park said, “I parked my car in front of a large villa in Asan and a [57-year-old] villa manager surnamed Kim smashed the windows and stole 35 million won.”

When the police looked into the case, it was found that the van was actually owned by Mirae’s Chairman Kim. When asked about this, Park confessed that he called the police “on behalf of Chairman Kim.”

According to prosecutors, Kim has testified that his friend called him after running away the money and said he would return it. But he changed his mind later, saying, “I will take part of the money because you won’t be able to report this case to the police since the money was from a secret fund.”

Prosecutors are now not believing the theft story because they don’t believe Kim would have slept with 5.6 billion won inside the van, and that the two were close friends for 50 years.

Meanwhile, prosecutors also said yesterday that the 56-year-old chairman Kim of Mirae Savings Bank is suspected of having given 300 million won to Korean gang members that have ties with a Chinese organization to help him plan his flight to China and to secure a hideout there. Kim is also suspected of giving another 700 million won to his driver before attempting to flee to China last Thursday to keep his mouth shut.

Prosecutors are weighing the possibility that the 300 million won Kim gave to the Korean gang may have already been given to the Chinese group. Two of the four people caught by the Korea Coast Guard officials last Thursday with Kim were found to be members of a gangster group in Korea.