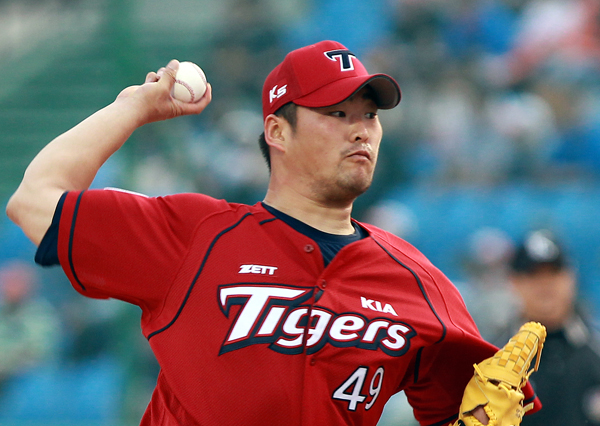 
It had been 1,791 days, but on Wednesday, Kia Tigers pitcher Kim Jin-woo, once one of the most sought-after baseball prospects in Korea, finally walked out of the dugout with a win.

Kim was one of the top prospect pitchers when he made his professional debut in 2002 after graduating from Gwangju Jinheung High School. He received 700 million won ($613,000) as a signing bonus, the second-highest amount in KBO history.

In his rookie season, Kim was first in the league in strikeouts (177) and eighth in wins (12). He also received exemption from military service after he helped Korea win the gold medal in the 2002 Asian Games.

There was no sophomore jinx for the right-hander as he went 11-5 and finished the season second in strikeouts and fourth in ERA.

But while everything was going well on the mound, events outside the stadium began to interfere with the rising star’s success.

Kim’s mother had died in a tragic accident just before he made his KBO debut. With 400 million won of his signing bonus, Kim built a house for his family to live in. But while he was in Japan for preseason training, his mother fell from the construction site and died on impact.

The traumatic event changed Kim’s life both on and off the field.

It was reported that after his mother died, Kim began drinking heavily and became violent. He was involved in two cases of battery during that time.

In 2004, injury prevented him from playing baseball. He only featured in 19 games. The pitcher came back in 2005 with a record of 6-10 with a 3.95 ERA, but with younger pitchers entering the league, Kim was no longer an ace on the mound.

After further off-field troubles including misdemeanors, Kim pitched against the Samsung Lions on June 14, 2007, and won his first win of the season. No one knew at the time that it would be his last for almost five years.

After a game on July 6, 2007, against the Hyundai Unicorns (now the SK Wyverns), the Tigers decided to ban Kim from the league, citing drinking problems and leaving the team without permission. Kim vowed to change, but every time another incident arose, it never went smoothly.

Last June, Kim was able to rejoin the first team roster after publicly apologizing to teammates and fans. This time, he was mentally determined but physically behind.

In his first three starts, Kim failed to collect a win. But he believed his hard work and persistence would pay off. And finally, on Wednesday, it did.

“I thought I would cry when I won, but I didn’t,” Kim said after the game. “Maybe because I was too happy about it. I thought of my mother and my grandmother who passed away last month and all the fans who supported me.”
By Joo Kyung-don[kjoo@joongang.co.kr]