Benson, Benet ready to ‘Jazz UP Your Soul’

Benson, Benet ready to ‘Jazz UP Your Soul’ 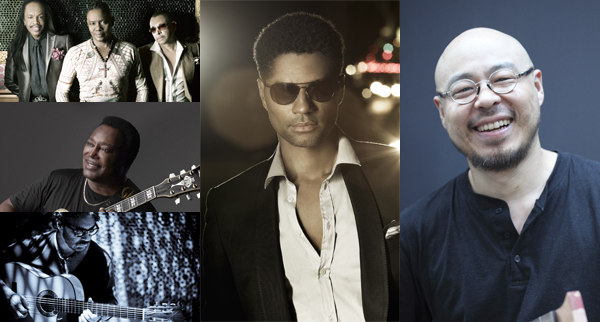 
Given the star-studded lineup planned for this year’s Seoul Jazz Festival, set to kick off next week, it’s no wonder that special tickets for the event sold out just 20 minutes after going on sale on March 22.

Overseas artists including Earth, Wind & Fire, George Benson and Eric Benet will join local performers who are sure to “Jazz UP Your Soul,” as the catchphrase of the festival goes.

Now in its sixth year, this year’s event will be held for two days in various stages from May 19 to 20 at a number of Olympic Park venues, including the 88 Garden and the Lakeside Stage.

“This year’s festival is attracting more people not only because of the heavy hitters among the participating overseas artists, but also because of the appealing nature of its outdoor venues in this beautiful spring season,” said Kim Ji-ye, an official from the Private Curve, the organizer.

“During a pre-sale, we sold all 1,500 special tickets very quickly. I think people like the idea of taking the festival outdoors.”

Plenty regular tickets out of the 10,000 spots available are still up for sale, though they are pricier than the special tickets.

In trying to broaden the festival’s appeal from last year, organizers have begun to interpret the genre of jazz more broadly and have added to the schedule more musicians who work across multiple genres.

“I once heard a musician saying that the foundation of all music is jazz,” Kim said. “So we didn’t want to limit the program for the festival only to conventional jazz. I think our regular attendees freely define jazz, so we drew up the program so that the first day has broader offerings while the second day focuses on conventional jazz.”

On the first day, famous American singer-songwriter Ledisi, who is known for jazz-influenced vocals, will stage a 70-minute concert. The performance will be followed by Korean hip-hop duo Leessang, who will appear with Jung In, a singer featured in the duo’s song “Rush.”

Also performing is R&B and soul superstar Eric Benet, who is returning to the festival for the fourth time since 2009.

According to Private Curve, the musician continues to come back because he has been captivated by his Korean fans’ special enthusiasm for his work.

Tickets for Benet’s first concert in the country sold out very quickly, reportedly making an impression on the star.

He once posted on Twitter in awkward but endearing Korean, saying “Korea has some astounding talent” in support of Park Ji-min, the 15-year-old winner of reality television competition show “K-pop Star.”

American band Earth, Wind & Fire will likely be the highlight of the first night, as its music spans the musical genres of soul, jazz, R&B, funk and even rock.

The group is best known for its song “September” in Korea and will perform starting at 8:30 p.m.

On the second day, overseas musicians including the visionary ensemble Brian Blade and the Fellowship Band will perform as well as Al Di Meola, one of the most influential jazz guitarists in the world. Benson, a 10-time Grammy Award-winning American jazz guitarist, will close the festival.

Other musicians on the schedule include the six-member group Sonodaband from Japan as well as local artists including singer-songwriter Cho Kyu-chan and the Korean fusion jazz band the Bird.