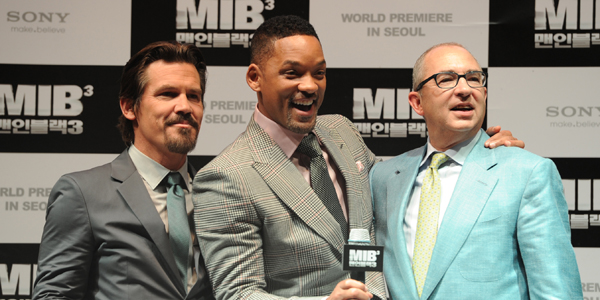 From left: Josh Brolin, Will Smith and Barry Sonnenfeld pose for reporters during the world premiere of their film “Men in Black III” on Monday in Seoul.

It has already been a decade since we last saw Agents J and K fight off extraterrestrials on the big screen. But the Neuralyzer wasn’t able to erase audiences’ minds for long.

With “Men in Black III,” the boys are back in town, and director Barry Sonnenfeld promises the latest installment of the highly popular sci-fi/comedy franchise is packed with “more action, more aliens, more comedy and more heart.”

“[Men in Black III] is my favorite emotionally out of the three movies, and these guys [pointing to Will Smith and Josh Brolin] were fantastic in it,” said Sonnenfeld, sitting next to the film’s two stars at a press conference at the Ritz-Carlton Hotel in southern Seoul this week. The film’s world premiere was held in Korea on Monday. 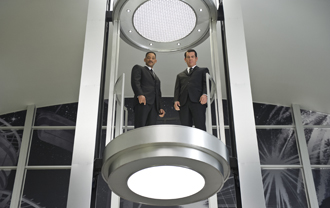 Will Smith, left, and Josh Brolin pair up in “Men in Black III” as Agent J and young Agent K. Provided by All That Cinema

Following the huge success of “Men in Black II” in Korea back in 2002, Colombia Pictures has high hopes for the May 24 release in the country, one day before it hits theaters in the United States.

“Korea is a huge growing market in the film world and it seemed like the perfect place to begin,” said Will Smith during the press event.

On returning to Korea after 10 years, the star said he was very excited to be here this time with his wife and daughter, and displayed an interest in K-pop and Korean cinema.

“My wife and daughter are huge world music fans. Willow [Smith’s daughter] wants to meet the Wonder Girls,” he said.

“Mr. Park [director Park Chan-wook] is probably the most famous Korean director in the U.S. I think what’s really distinct about Korean films is the cinematography .?.?. the way that the action is shot in Korea is very distinct,” the actor added, saying that he has recently considered directing himself.

In addition to being a sequel, “Men in Black III” is in a way a prequel as well. Agent J (Smith) travels back to 1969 and teams up with the young Agent K (Brolin). Along the way, Agent J discovers secrets about his mission and about Agent K’s mysterious past while, of course, stopping alien criminals from destroying Earth.

The central idea for the third movie came from none other than Will Smith, while shooting “Men in Black II,” according to the director.

“We were on the set of ‘Men in Black II’ and it was late and cold and we were sitting outside and behind schedule. But Will, who has way too much energy, sat down next to me and said ‘Barry, I have an idea for ‘Men in Black III,’?” Sonnenfeld said.

“[Smith suggested] in the opening of the movie .?.?. that the villain has done something to K and I have to jump back to the past and save Agent K and by doing so, I and the audience learn some secret things that none of us knew about the Men in Black.”

As for returning to play Agent J after 10 years, Smith said, “This is the first movie that I made in a trilogy. Playing a character three times for me, it feels like home.

“I’ve been off-camera for four years now so for me, coming back to something that I know that is warm was like a family reunion, something very special.”

Playing the young version of Agent K, a role that had been solidified by Tommy Lee Jones, Brolin said he at first felt the pressure to fill his predecessor’s shoes.

“I felt like I was in sort of a blackout during the movie because the thought of doing an impression of Tommy and Tommy seeing the film was very unsettling for me,” said Brolin, adding that he felt relieved when he’d heard that Jones complimented his performance.

Sonnenfeld said that he first saw Brolin in the film “W.,” in which he plays former U.S. President George W. Bush, and he immediately thought Brolin would be perfect as a young Agent K.

“Instantly I knew, if we were going to need to find someone to play young Tommy Lee Jones, it had to be Josh Brolin, because if that person wasn’t perfect, then the audience would be so upset that we’d lost the relationship between Will and Tommy,” said Sonnenfeld.

The actor, best known for his performances in “True Grit” (2010) and “No Country for Old Men” (2007), is also set to play a villain in the Hollywood remake of Park Chan-wook’s award-winning film “Oldboy” (2003). Along with Smith, Brolin showed an adamant affection for Korean cinema, citing films by directors Park Chan-wook and Bong Joon-ho that have inspired him.

“Director Park [Park Chan-wook] is an incredible guy ... His [revenge] trilogy I find to be one of the best trilogies I’ve seen,” said Brolin.