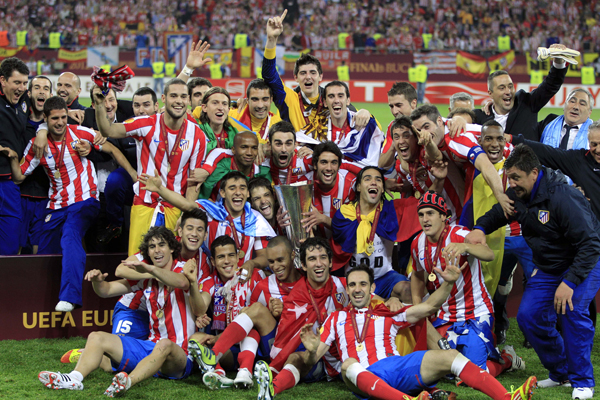 Atletico Madrid players celebrate with the trophy after defeating Athletic Bilbao 3-0 at the end of the Europa League final football match at the National Arena in Bucharest, Romania, on Wednesday. [AP/YONHAP]


BUCHAREST, Romania - Radamel Falcao decided the Europa League final for the second year in a row, scoring twice in the first half Wednesday to lead Atletico Madrid to a 3-0 victory over Athletic Bilbao in an all-Spanish matchup.

Atletico captured its second title in three seasons while Falcao won consecutive trophies with two different sides, having scored the only goal in the final for Porto last year.

He netted a spectacular opener in the seventh minute of this final and then added a second in the 34th. Diego completed Atletico’s win in the 85th.

“It’s incredible. I give thanks to God because he gave me this gift that few players ever have the chance to experience,’’ Falcao said. “Today I scored two goals with my left foot - my right one I used as support.’’

Falcao also topped the competition’s scoring chart for the second straight year, and the Colombia striker now has 29 goals in 29 games over two seasons in the Europa League.

He was brought in as a replacement for Sergio Aguero, when the striker left Atletico for Manchester City.

“When I came to Atletico, I said I was going to win titles,’’ said Falcao, nicknamed “El Tigre.”

“He has no ceiling in terms of his ambition as a player. But I hope he stays with us,’’ Simeone said.

Simeone got the better of his former mentor Marcelo Bielsa. Simeone played for Argentina when Bielsa was the national team coach.

Atletico, which beat Fulham in the final two years ago, won its last 12 matches in this season’s competition.

Atletico dominated the final before 52,347 mostly-Spanish fans, who were hard to distinguish since both teams have red and white colors. Bilbao, being the away team for the occasion, wore green shirts.

“There was a huge difference between the two teams,’’ Bielsa said. “They imposed their style of play and we did the contrary. They deserved to win, but we can play much better than the score line indicates .?.?. I am disappointed, the players are devastated. I am responsible for the performance of my team. We defended badly and attacked poorly.’’

Falcao struck his first after a good through ball from Diego. The striker was confronted by Fernando Amorebieta but the Bilbao defender slipped, lost a step and Falcao curled an unstoppable left-foot shot inside the far post in the upper-right corner.

“My father always told me to aim for the far post - he’ll be happy,’’ Falcao said.

His second came after another error by Amorebieta, who carried the ball outside of his penalty box but carelessly lost it again to Mario Suarez, and Arda Turan collected it to set up Falcao. The striker deftly turned a defender and slotted the ball into the roof of the net from close range. Amorebieta’s miserable evening got even worse when he was easily rounded by Diego for the final goal. AP