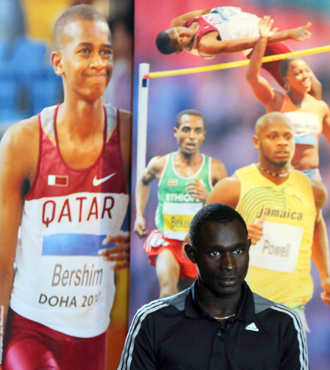 David Rudisha of Kenya, world record holder and world champion in the 800 meters, speaks during his press conference on Wednesday in Doha, Qatar. [AP/YONHAP]

DOHA, Qatar - The outdoor athletics season gets under way proper today when the Qatar Sports Club hosts the first leg of the prestigious 14-meet Diamond League, with all eyes on this summer’s Olympic Games in London.

Jamaican sprint star Usain Bolt will be absent, however, having preferred to make his season debut on home soil last weekend (with a world lead of 9.82 seconds over 100 meters) and European bow in Ostrava, Czech Republic, later this month.

But a top-quality field has nevertheless been assembled for the kickoff of the global circuit that also sees events held in Shanghai, Rome, Eugene (United States), Oslo, New York, Paris, London and Monaco before the London Olympics.

The second part of the season recommences in Stockholm on Aug. 17 and takes in Lausanne (Switzerland), Birmingham (England) and Zurich before climaxing in Brussels.

World 800-meter champion David Rudisha of Kenya was in no doubt about what the season had in store.

“This year is an Olympic year and that is my main focus, my priority,” Rudisha said. “Doha is the first stepping stone towards that goal.

“To win the Olympics is important and that is what I’m so far missing.”

Comments echoed by many of the athletes and organizers gathered in sweltering Doha where daytime temperatures are currently topping 40 degrees Celsius (104 degrees Fahrenheit) are hoping to attract more people into the stadium than last year’s distinctly average attendance for the early-evening event.

Star draws include not only Rudisha, who was deprived of an early season showdown with Ethiopian upstart Mohammed Aman (late withdrawal), but also former joint world record holders Asafa Powell and Justin Gatlin facing off in the men’s 100 meters.

“We’ve competed against each other nine times and I’ve won six,” said Gatlin, who bounced back from a four-year doping ban in remarkable style by claiming a second world indoor 60-meter title in Istanbul in March (after his previous gold in 2003).

“It feels good to be in strong competition again. I’m always a competitor at heart.

“It will be a great gauge for me going into the next phase of my season.”

Gatlin actually matched Powell’s then-record of 9.77 seconds over the 100 meters in Doha in 2006 - the result later rescinded after the American failed a doping test - but he insisted he had only good memories of the Qatari capital.

“The night I broke the record was a magical night,” the 30-year-old Brooklyn native said.

“I could see history being made on the track. Doha’s a very special place for me and definitely an important part of my journey.”