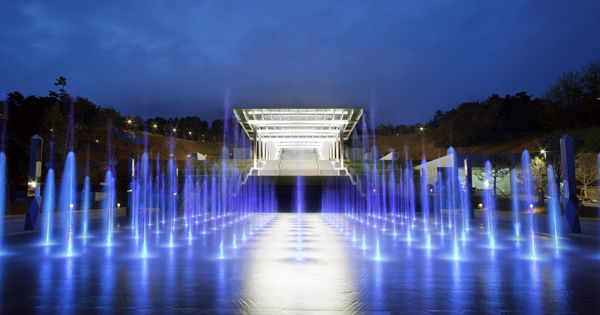 GS Caltex opened a culture and arts park named Yeoulmaru in Yeosu, South Jeolla, yesterday. The park includes a theater and a trail from Mount Mangma to Jang Island in the South Sea. Provided by the company

“I personally don’t think that Korean oil market is an oligopoly,” said Hur at a press briefing yesterday in Yeosu, prior to the opening of its new park there.

“Monopolies or oligopolies are only possible when the market is closed because it is also possible for other Asia-based oil refiners to take part in the local market,” he said. “And it’s a subjective judgment to decide whether four refiners are enough.”

The chairman of the nation’s second-largest oil refiner also said that forcing refiners to lower oil prices will only hurt the companies’ competitiveness.

“If local refiners loose competitiveness, then the country will have to heavily rely on oil imports as Indonesia now does,” said Hur. “Then [consumers] would have to pay a much higher price for oil.”

The best way to fight high oil prices is to be thrifty, said Hur.

Meanwhile, the company yesterday opened a culture and arts park in Yeosu prior to the opening of the Yeosu International Exposition Saturday.

The park includes a theater and a trail from Mount Mangma to Jang Island in the South Sea. The company first agreed to construct a park for the local community in Yeosu in 2007. GS Caltex was the first company to open an office in the Yeosu Industrial Complex 45 years ago.

GS Caltex invested more than 100 billion won ($87.5 million) in the park. It will jointly operate the park for the next three years with the Yeosu city government before the local government takes over full operations.
By Lee Sun-min[summerlee@joongang.co.kr]