ING’s sale of its Asian assets to gain many bids

ING’s sale of its Asian assets to gain many bids 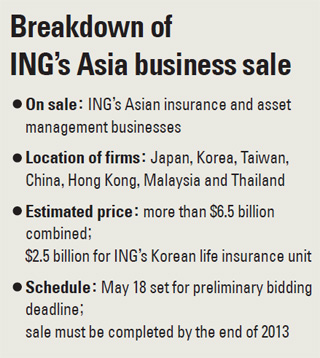 The sale of ING Group’s Asian business is shaping up to be one of the hottest M&A prospects in the financial world this year as a panoply of local players and global insurance heavyweights prepare for a bidding war that could push the price tag above $6 billion.

Local sources confirmed yesterday recent reports that the Amsterdam-based global financial group ING will be receiving preliminary bids for its Asian-Pacific business “by the third week of May.” ING Korea’s spokeswoman declined to comment.

Up for sale are ING’s constellation of insurance and asset management operations in the region, including eight wholly-owned or joint-venture insurance businesses operating in seven regions: Korea, Japan, China, Hong Kong, India, Malaysia and Thailand. Bankers have claimed the total value of the sale could reach $6.5 billion, with the insurance businesses taking the bulk of the sales price, or $6 billion.

Since ING was ordered by the European Commission to sell its global insurance arm in return for the state aid it received during the 2008 financial crisis, public details of the sale have been slim as ING keeps its strategy close to the vest, possibly to encourage competition.

However, the varied portfolio and sheer size of the businesses on sale has interested suitors potentially seeking to acquire multiple businesses across countries, and others who have limited their interest to specific countries.

While ING reportedly would prefer to sell its entire Asian operation in one go, would-be buyers have been allowed to bid for specific regional businesses, while its joint ventures are slated to be sold separately.

Several piecemeal deals are likely when considering the different values of ING’s businesses.

Korea and Japan account for about two-thirds of ING’s Asian business, but while ING Life Insurance in Korea is valued at about $2.5 billion, ING Life Japan has some 18 billion euros ($22.3 billion) in high-guarantee variable annuity policies weighing down its books, discouraging suitors.

Meanwhile, ING’s Malaysia operation is also considered a big draw, worth about $1 billion and with a local market share of roughly 10 percent.

KB Financial Group has reiterated its interest in acquiring ING Life Korea to strengthen its weak presence in the local insurance sector.

“Policies at Korea Life have a certain amount of age, and the question remains where it will find growth,” said David Rhee, analyst at Hyundai Securities. “ING’s Asian unit would provide good momentum.”

Park Keun-hee, CEO of Samsung Life, has expressed interest in acquiring ING’s Malaysia unit, as the nation’s No. 1 insurer in assets seeks to expand its footprint in Southeast Asia this year.

Although the deadline for preliminary bids might reportedly be a week away, the entire sale process is expected to take longer. “Considering the massive size and the many variables, the details could be fixed early next year at the earliest,” said a high-ranking official at a major local insurance company.
By Lee Jung-yoon[joyce@joongang.co.kr]