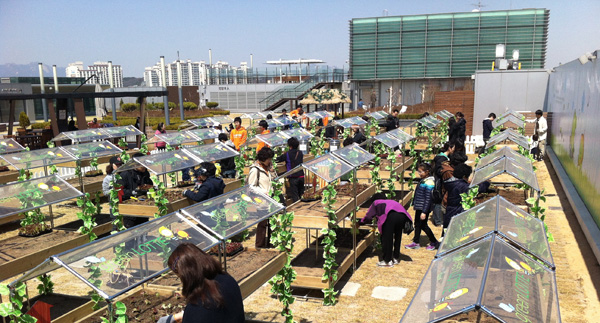 Families check out a rooftop garden at Lotte Department Store’s Cheongnyangni branch where they can grow and harvest vegetables free of charge. Provided by the company


For retailers in Korea, offering quality goods at cheap prices was the traditional tactic to pry open wallets of consumers who cut back on spending during an economic downturn.

Now retailers, and especially department stores, are trying new marketing strategies, one of which is “environmentally friendly facilities,” which are drawing curious customers to stores and persuading them to spend.

On a sunny Wednesday afternoon, a 36-year-old homemaker surnamed Lee and her 6-year-old daughter were checking out lettuce actually being grown on the rooftop garden at Lotte Department Store’s Cheongnyangni branch.

Lee confessed she didn’t frequent the department store until it opened weekend rooftop gardens for 50 interested families, where they can grow and harvest vegetables ranging from lettuces to sesame leaves for free.

“Now I come here at least three days a week to show my little girl a small world of nature,” Lee said.

When Lotte’s Cheongnyangni store first opened a rooftop garden named City Farm in April and sought out 50 families interested in growing vegetables, the competition ratio was 70 applicants for every place.

Each family was given a two-story container measuring 1,200 millimeters by 700 millimeters. Between 40 and 50 seedlings of lettuce were also given free of charge, and it takes a month to harvest fully grown lettuces.

“Normally, weekend vegetable gardens are located in the outskirts but the City Farm provides a good educational experience for children in downtown neighborhoods, not to mention getting environmentally friendly vegetables to bring home,” said Park Min-a, a spokeswoman at Lotte. “We’re currently looking into opening rooftop farms at other stores as average customer purchases at the Cheongnyangni store went up 250 percent compared to stores that haven’t built a garden yet.”

Retailers said this was a typical “shower effect” marketing strategy. By placing popular goods and services that draw consumers’ interest on the very top floor of a store, sales on the lower floors increase as well.

“We allot spaces for kindergarteners to raise awareness of eco-friendly farming,” said Lee Kyung-hoon, a spokesman for the store.

Song, a 38-year-old mother of two children, said she often ends up buying groceries and other goods after visiting the VerTera garden.

“It’s amazing to see how your kids can identify vegetables,” Song said. “I’m more than happy to spend money at stores that are more environmentally friendly.”

Both Lotte and Hyundai also run rooftop parks with trees and grass as rest spots for customers.

Lotte said rooftop facilities save air-conditioning and heating expenses by 10 percent and cut down on 250 tons of carbon dioxide emissions every year.

Lotte, for example, got a head start by opening eco-friendly shops at its Sogong and Jamsil branches in collaboration with the Korea Green Foundation in 2007 and 2009, targeting environment-conscious consumers.

Products such as T-shirts made with organic cotton and other kinds of accessories are available at shops. All proceeds of sales are donated to poor countries.

Sales at Lotte’s eco store grow by 20 percent every year, according to the retailer.

Meanwhile, I’Park Mall opened a rooftop futsal, or indoor football, stadium in April. The retailer takes reservations for using the space and it’s already booked a few months ahead. “We’re certain that futsal stadiums will boost sales of sports items in the future,” said Park Hee-jung, a spokeswoman for I’Park Mall.

Kim Sang-hyun, a Yeungnam University business professor who also heads the Korea Distribution Association, said, “More and more local retailers will adopt eco marketing as they began to perceive ‘green management’ as a new trend, not a fading fad.”
By Kim Mi-ju [mijukim@joongang.co.kr ]