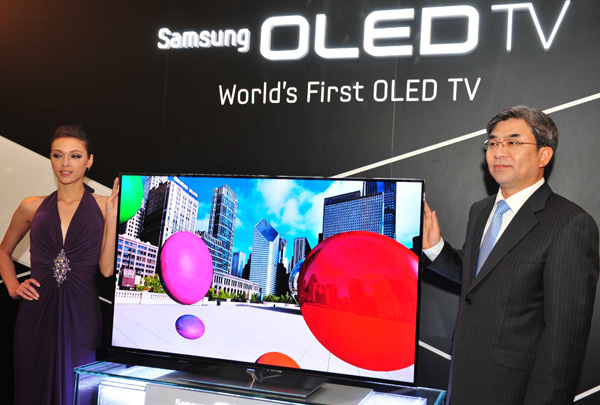 Kim Hyun-suk, head of Samsung Electronics’ TV business, right, presents yesterday a 55-inch OLED TV to be mass produced starting in the latter half of this year at the company headquarters in southern Seoul. [NEWSIS]


Samsung Electronics said yesterday it is aiming to launch flat-panel TVs using new screen technology called OLED in the domestic market during the second half of this year.

That is at least more than twice as expensive as the high-end 55-inch TVs available in the market.

Kim Hyun-suk, head of Samsung’s TV business, told reporters that it will take another two to three years for the new screen technology to go mainstream in the TV market.

It also allows a TV design that is thinner and lighter than products made of LCD or plasma, but due to the challenges in mass production with consistent results, only some high-end smartphones have adopted the OLED screen.

Even before the new technology takes off and the price comes down to a more affordable level, Samsung and its hometown rival LG Electronics are rushing to lead the fledgling segment that could help set them further apart from rivals in Japan and Taiwan.

LG Electronics plans to launch its first OLED TV during the fourth quarter of this year.

Since then, Samsung and LG have shown prototype OLED TVs at an annual trade show, but 2012 is the first year that they have unwrapped the big-size OLED TVs that will become available for consumers.

Samsung and LG controlled a combined 35 percent of the global flat-panel TV market in the fourth quarter of last year, followed by Japan’s Sony and Panasonic. AP