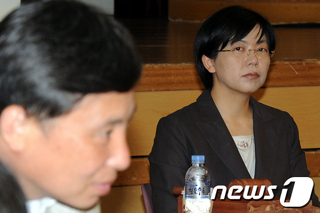 The internal feud within the opposition Unified Progressive Party has turned into a fact-checking fight over whether the primary’s online voting was rigged.

The country’s third-largest party, which earned seven geographic constituencies and six proportional seats in the April election, is embroiled in controversy over whether their proportional primary was fairly conducted.

The primary was held in March and about 90 percent of the ballots were cast through online voting.

The party’s largest faction argues the primary wasn’t rigged, but nonfaction members including two co-chairs say there were apparently skewed votes and the leadership and proportional candidates should step down.

In an interview with OhmyNews on Wednesday, Jo showed 30 suspicious online votes, saying they were apparently made by ghost voters who weren’t registered on the electoral roll.

First, Jo said there were at least five votes that came from the same last seven digits of an identification number and same IP address.

In Korea, the 13-digit ID number consists of the six digits of a citizen’s birth date and the last seven digits are sex, regional code, order of birth registration and a random digit.

Statistically, it’s very rare to have an identical final seven digits of an ID number. If the five people indeed cast ballots, it means: their gender is the same; they were born in the same electoral district; their birth was registered in the same order; they have the same random digit; they all joined the UPP; and they voted through one IP address for a certain candidate. Jo said the five voters aren’t blood-related.

Jo also said that some voters wrote their last seven digits as 2000000.

He also added that the online votes of a certain proportional candidate surged suddenly soon after an election manager opened the voting operation program.

“I can’t understand these kinds of unusual votes,” Jo said. “They were apparently rigged.”

However, the party’s Co-Chair Lee Jung-hee, a member of the largest faction, yesterday responded by saying that having similar ID digits is statistically frequent.

“We found a case where 441 out of 528 residents in a certain village had similar ID numbers,” Lee told reporters at a press meeting. “For 441 people, more than two of their last seven digits were the same.”

When it comes to the nonexistent voters, Lee said she confirmed that one of them was living in Europe and didn’t have a Korean ID number. Others just mistyped their digits, she said.

But Lee didn’t say anything about the increased number of online votes after the manager opened the operating system.

In the midst of mounting tension in the UPP, the country’s largest organization of left-wing labor activists said they will determine whether to withdraw their support for the party unless the party’s leadership and candidates resign.

The Korean Confederation of Trade Unions’ spokesman Jeong Ho-hui told local media Wednesday that they will hold an emergency meeting today, because they think their liberal values will be tainted by the opposition party’s dirty fights over the primary-rigging scandal.