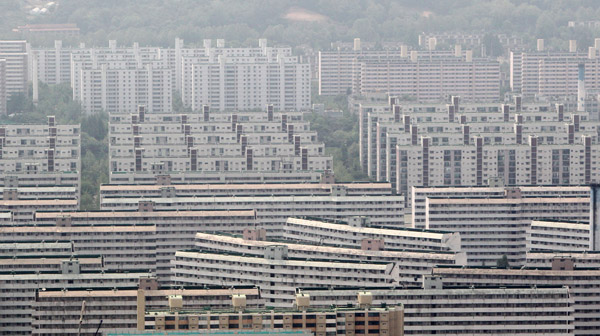 After six failed attempts last year, the government yesterday announced a new package of measures to stimulate the property market, which is in its fifth year of depression, including removal of some restrictions imposed by the former administration.

However, property analysts gave the measures a thumbs down, saying what the market needs is a lifting or easing of the debt-to-income (DTI) ratio, which decides how much people can borrow to buy real estate.

The Ministry of Strategy and Finance, the Ministry of Land, Transport and Maritime Affairs and the Financial Services Commission released the new measures, largely consisting of easing some current restrictions on property transactions and relieving stiff tax codes.

“The main idea of the latest May 10 housing package is to normalize transactions in the housing market,” said Land Minister Kwon Do-youp at a press conference yesterday. 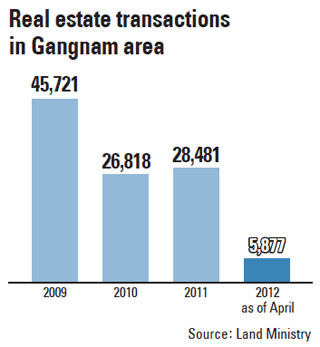 The core of the package is to get rid of restrictions on buying or selling houses in three expensive districts in southern Seoul - Seocho, Songpa and Gangnam - that were put into effect in 2003 by the former Roh Moo-hyun administration to stop a bubble from growing. It branded those neighborhoods “areas of real estate speculation.”

When the three districts become free of the restriction from May 15, the loan-to-value (LTV) and DTI ratios for buying houses will go up from 40 percent to the 50 percent applied to other parts of Korea.

The LTV is a ratio that sets the maximum amount of loans a homeowner can get in proportion to the market value of a property. The DTI is a ratio that prohibits people from borrowing above a certain percentage of their incomes. The current 40 percent DTI means home buyers cannot spend more than 40 percent of their annual income on mortgage payments.

Also, people who own more than three houses or apartments in the neighborhoods will no longer be subject to an additional 10 percent tax when selling real estate.

“Home prices in these areas are stabilized, but transactions have remained low, so there’s no need for an anti-speculation measure,” an official at the Finance ministry said.

However, the market has long expected the government’s moves.

“Removing the speculation restriction isn’t enough to revitalize the slumped market,” said Choi Gi-hoon, a realtor in Banpo-dong, Seocho said. “It would be more helpful to relieve restrictions on apartment reconstruction projects.” 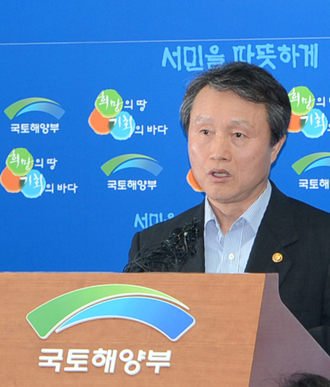 According to Choi, prices of apartments in the Seocho District plunged by 10 percent on average in the past 18 months, and there has been no sign of a rebound.

The market has long wanted the DTI ratio to be lifted entirely or raised, but the government said that is not being considered due to soaring household debt in the country.

The DTI rule was also introduced in 2005 by the Roh administration to reduce risks of a rapid increase in mortgages being taken out.

The current government rolled out a total of six plans last year to perk up the market, but they failed to tame runaway jeonse prices (or two-year deposits) and boost transactions. Koreans rent more through jeonse transactions when they feel the real estate market is not good enough to buy into.

“The purpose of the latest plan is to help those who can afford a house by eliminating some major regulations,” said Park Sang-woo from the finance ministry.

The government will also lower the capital gains tax for those who own two or three homes to 6 to 38 percent from the current 50 to 60 percent.

Analysts said to boost demand, the government should ease regulations in financing or provide tax incentives.

“The demand side has wanted the government to come up with some fresh measures, but people are disappointed at the plan again, and this could lead to further drops in home prices,” said Yang Ji-young, a real estate agent.