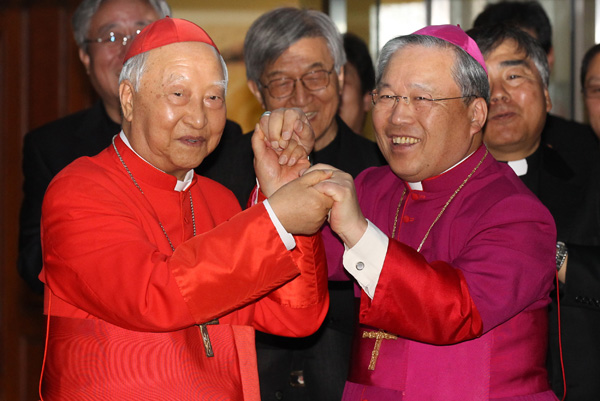 Bishop Andrew Yeom Soo-jung, right, celebrates his appointment as the archibishop of Seoul with Cardinal Nicholas Cheong Jin-suk, left, after the Vatican and the Archdiocese of Seoul made the announcement in Rome and Seoul at the same time yesterday. By Choi Seung-shik


Bishop Andrew Yeom Soo-jung has been appointed archbishop of Seoul.

Yeom, 69, will be replacing Cardinal Nicholas Cheong Jin-suk, 81. Cheong submitted his resignation in 2006 when he was 75 years old, the retirement age for archbishops.

“Pope Benedict XVI has accepted Cardinal Nicholas Cheong Jin-suk’s request to resign from the Archbishop of Seoul,” the Vatican Embassy in Korea said yesterday evening. And as Cheong’s successor, “Bishop Andrew Yeom Soo-jung has been appointed,” it added.

Since late last year, when Cheong passed the age of 80, the Korean Catholic community has waited for word on who would succeed him. Under reforms by Pope Paul VI in 1970, cardinals over 80 cannot take part in the voting for a new pope.

Cheong has served as archbishop of Seoul for 14 years since May 1998, when he was appointed to the post to succeed Kim Sou-hwan.

Yeom was born in Anseong, Gyeonggi. He graduated from the college of theology at Catholic University of Korea in 1970 and was ordained to the priesthood the same year.

Catholicism is deeply rooted in Yeom’s family. His family has been Catholic since the early 1800s with some of them dying as martyrs when Korea persecuted Christians in that era. Two of his brothers - Soo-wan, 66 and Soo-eui, 63 - are priests.

The transition is expected to be smooth as, according to insiders, Yeom has taken over many of Cheong’s duties in recent years.

The appointment of Yeom was a surprise as some in the Catholic community expected Bishop Peter Kang Woo-il of Jeju to succeed Cheong, and there were other candidates.

Kang was vocally opposed to the Lee Myung-bak administration’s four-rivers restoration project and the building of a naval base in Jeju, reminiscent of Cardinal Kim Sou-hwan, who actively supported the democracy movement of the 1970s and 80s.

Meanwhile, analysts are wondering when Yeom will be named a cardinal, especially after Cheong - the only Korean cardinal alive - lost his voting rights in papal elections due to his age.

“Appointment of a cardinal concerns a representation of a country’s church, so it is also a political consideration,” one source said. As of February of this year, there are a total of 213 cardinals with voting rights in papal elections, and 125 cardinals without such rights.