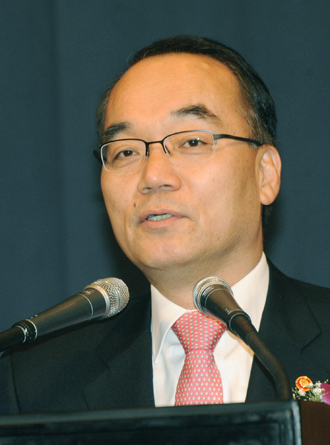 Hinting that uncertainties still remain on the inflation front, the Ministry of Strategy and Finance yesterday disclosed measures to stabilize supply and demand of produce and provide support to the low-cost fashion business.

He reiterated that a hike in public utility bills would be postponed further, saying the government and public institutions need to absorb rising utility bills through efficient management.

Bahk described a new package of measures to stabilizing the supply of produce, encourage competition to bring down the cost of clothes and help reduce education costs.

The government will take greater control over the supply of cabbages, peppers and onions, whose prices fluctuate widely, the minister said.

The Korean government signs contracts with farmers to distribute their products.

“For cabbages, the government will increase its production under contract with farmers up to 55 percent of the country’s total agricultural production by 2015,” Bahk said.

The food ministry had contracts on 8.6 percent of the country’s total agricultural production until last year and plans to expand the percentage to 30 percent. According to the finance ministry’s calculation, farmers will plant more while consumers will get stabler prices.

As part of the stabilization plan, Bahk proposed enhancing the role of the National Agricultural Cooperative Federation, or Nonghyup, whose retail unit was split from its financial unit, which is supposed to strengthen the retail side. The government will allow Nonghyup to expand its distribution and wholesale buying operations to up to 33 percent of the areas where produce is grown by 2020 compared to the current six percent, Bahk said. Noghyup will purchase more produce and also sell more at its low-cost outlets.

Bahk also described a plan to bolster the local “fast fashion” industry as part of efforts to contain inflation.

Pointing out that clothing prices are too high in the country, the government has decided to promote growth of a new sector of the fashion market, which is the so-called SPA market.

The SPA refers to a business model in which a company designs and manufactures clothes and sells them at its own store under the company’s name. It is also called fast fashion, because the whole process from designing to sales is rapid.

Korean brands such as SPAO, Codes Combine, TNGT and Mixxo are preparing to expand their SPA business.

The finance ministry has allotted a total of 2 billion won to help those local companies, including financial support for small apparel companies that have difficulties with manufacturing and distribution. Also, the ministry will help nurture designers by providing subsidies for colleges when they create fashion-related courses.

“Providing high-quality clothes at affordable prices will help remove excesses in apparel prices,” the minister said. “Since clothes account for a large part of ordinary consumers’ spending, the SPA business will help reduce costs for consumers.”

As a short-term measure, the government also wants to contain education-related prices. In the fall semester, the finance ministry will monitor prices charged by school uniform manufacturers.
By Song Su-hyun [ssh@joongang.co.kr]