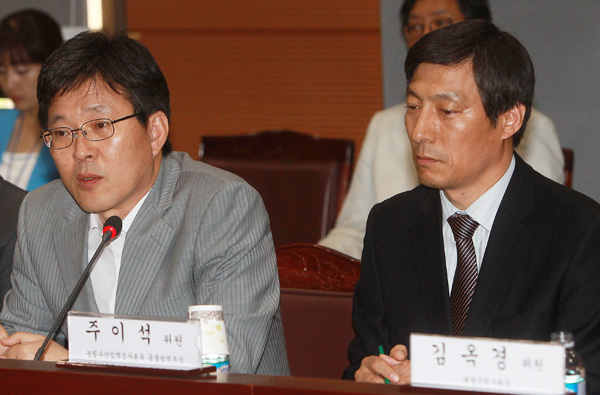 
The Korean government reconfirmed yesterday that there are no health risks from the case of mad cow disease discovered in a dairy cow in California last month based on the findings of a team sent to the U.S.

The government, however, decided to maintain the current enhanced level of quarantine checks on American beef to assuage consumer concerns. 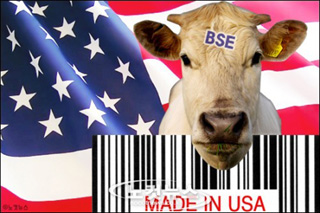 It will also carry out further inspections on 20 facilities in the United States that are responsible for slaughtering and processing beef sent to Korea.

“There are no risks to public health and safety in the beef imported from the U.S.,” said Agriculture Minister Suh Kyu-yong yesterday at a press briefing held at the government complex building in Gwacheon, Gyeonggi.

The briefing was held several hours after the nine-member government-civilian team that flew to the U.S. arrived back in Seoul in the morning after a 12-day trip.

They visited rendering plants, feed factories and cattle ranches to see how cattle are raised and processed in the U.S. At a rendering plant, they witnessed how workers separate the so-called specified risk materials, which are considered more likely to transmit mad cow disease, from meat.

“The inspection team was able to confirm that the dairy cow was infected with a rare type of bovine spongiform encephalopathy (BSE), the carcass was properly disposed of and the meat never entered the food supply,” Suh said.

The dairy cow was also confirmed as being 127 months old. Korea only imports beef from cows that are less than 30 months old under a bilateral deal with the U.S.

The team was not allowed to visit the California farm that raised the infected cow.

The minister’s comments came after ministries including the Prime Minister’s Office, the Ministry for Food, Agriculture, Forestry and Fisheries and the Ministry of Strategy and Finance jointly held a meeting to devise follow-up measures on the sensitive issue.

In 2008, mass protests erupted when the Lee Myung-bak government decided to fully resume imports of American beef after banning them in late 2003 after the first case of mad cow disease was reported.

When the U.S. Department of Agriculture announced April 25 that the fourth case of BSE in its history was confirmed, the Korean government didn’t halt imports but enhanced quarantine inspections, checking 50 percent of all U.S. beef, up from the usual 3 percent. The decision came despite demands from both the ruling party and opposition parties to halt customs clearance - shutting out imports - to protect Korean consumers. The parties criticized the government for failing to keep its 2008 promise that it would halt U.S. beef imports if additional mad cow disease cases were reported.

They even adopted a resolution early this month calling on the government to halt imports. The resolution urged the government to immediately suspend quarantine checks for American beef and to toughen Import Health Requirements for U.S. Beef and Beef Products signed by the two countries in 2008.

Yesterday, anti-U.S. beef politicians said the inspection team failed in its mission because it didn’t visit the California farm that was home to the infected cow.

John Clifford, chief veterinarian at the USDA, told reporters last week after meeting with the Korean delegation, “We will not actually be going to this specific dairy farm in question, but that is because of the confidentiality issues that we have in the U.S., where we do not release - not in this case or any other case - the name of the producer or the farm location.”

“We [the major opposition Democratic United Party] were quite skeptical even before the team left for the U.S. to check on the situation as to whether the trip itself would be successful,” said Park Jie-won, the new DUP floor leader. “And we were right. The team was only able to review documents.”

Park sharply criticized the government for wasting taxpayers’ money on the trip.

Joo E-suk, head of the inspection team, responded yesterday by saying, “Though we were unable to visit the Californian farm because the owner denied our request, we were able to hold an indirect interview on paper with the owner for an hour and a half.”

An official from the agriculture ministry said, “The government decided to carry out further inspections on the slaughtering and processing of U.S. beef.”
By Lee Eun-joo [angie@joongang.co.kr]