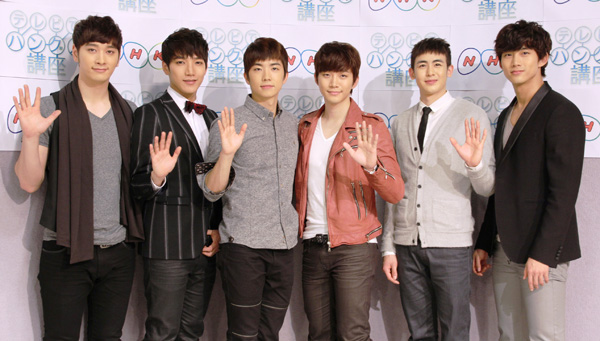 2PM, one of the K-pop acts to perform at the “Love-1 Festival” in Japan.[JoongAng Ilbo]


From June 16 to 17, various K-pop groups such as KARA, Rainbow, CN Blue, 2PM and Leessang will join forces with J-pop groups to perform at the “Love-1 Festival” to take place in Osaka.

The Japanese music festival is in its second season this year, kicking off last year in July as the first all-day outdoor K-pop concert event. More than 20,000 fans flocked to last year’s show.

“Love-1 Festival” is known for its emphasis on promoting volunteerism and respect for the environment via its music and sports events.

The participating K-pop acts are all very popular in Japan.

In April, KARA kicked off the Japanese leg of its Asian tour “Karasia” in Yokohama. The group will be busy touring around Nagoya, Osaka, Fukuoka, Tokyo and Saitama until late May.

In total, KARA will perform in front of more than 130,000 Japanese fans.

Meanwhile, boy band 2PM is set to release a new EP in Japan on June 6.